Keith Hu wants to be optimistic. He has spent most of his professional life working for companies involved in US-China trade. “Trade is out of the realm of commerce now,” said Hu, who came to the United States from Taiwan when he was a child. “Today it’s geopolitics.”

Hu’s is currently the director of international operations for Northwest Cherry Growers, headquartered in Yakima, Washington, or about 2 hours’ drive from Seattle. Prior to that, he helped a US toy company find manufacturers in China. He also worked for the game company Wizards of the Coast, creator of Dungeons and Dragons among other popular titles. He ran its manufacturing operation in Guangzhou.

How did cherries come into the picture? All of his jobs since he graduated college have involved serving as a bridge between the United States and China. Northwest Cherry Growers wanted to enter the China market to sell a fresh product from the state’s sizable harvest. Hu likes a challenge, and he knew China’s sizable middle class can afford imported fresh fruit.

“I targeted Guangzhou, Shenzhen, and Shanghai first,” he recalled. “The importers had no idea how to directly import and directly order since they had been purchasing fruit from countries other than the United States.” 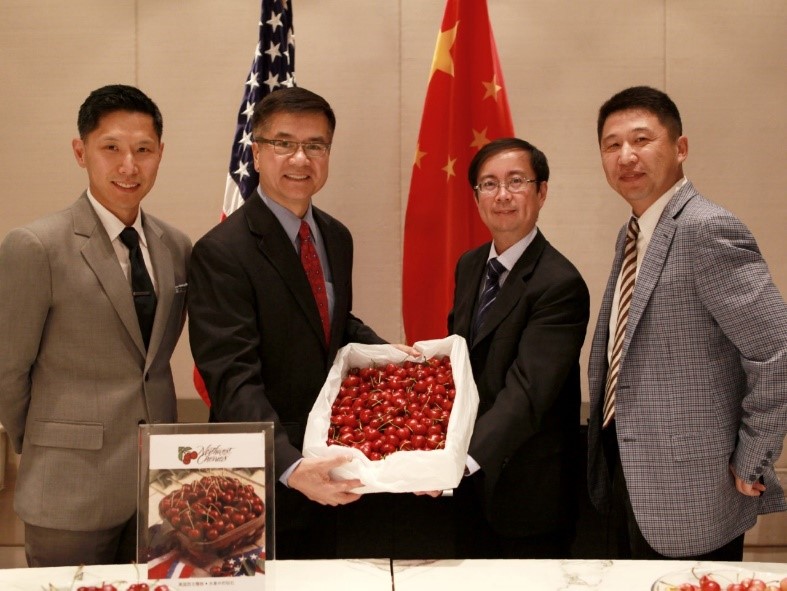 In 2013, United States Ambassador to China and former Washington governor Gary Locke did a promotion for Hu and his company. Ambassador Locke and CEO of TMall.com personally delivered three boxes of cherries to an online shopper in Beijing. Alibaba helped by selling cherries with a guarantee of 48-hour delivery. To get the cherries from Washington, China Eastern Airlines flew them from Seattle to Shanghai.

Hu tutored buyers on how to make the purchases, and it took a few years to work out the kinks. Cherry sales took off and reached a high of 33,000 tons in 2017. But sales shriveled after that with only 10,000 tons anticipated for 2021. “We are really struggling right now,” Hu lamented.

The main reason for the struggles is tariffs. On top of the Chinese 10 percent tariff on imported fresh fruits that has always been in place, since the trade war started in 2018, tariffs on cherries have increased 15 percent, then an additional 25 percent, then 5 percent more for a total of 55 percent – and that doesn’t include shipping, insurance, and other costs involved in getting the product to the buyer. 2020 saw COVID-19 lockdowns in China and now snarled ports and disrupted supply chains. Unlike wheat, corn and barley from Midwest farmers, cherries do not receive a tariff exclusion, meaning the China buyer must pay the tariff. Apples are in the same box. The exclusions were negotiated during the Trump administration, which in part was responding to pressure from lobbying groups and members of Congress, resulting in unequal treatment depending on where and what you farmed. 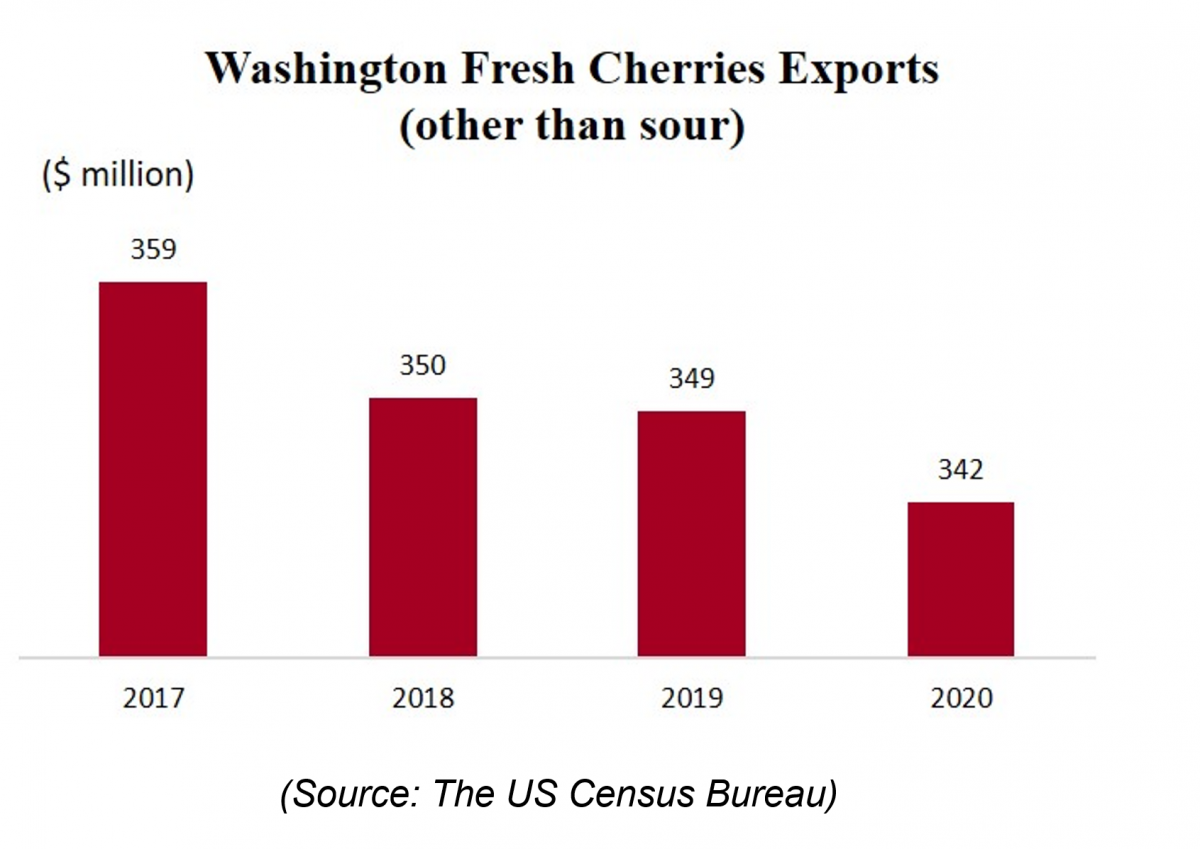 Hu says there are non-tariff barriers, too. “Shipments are scrutinized by customs at the port of entry every so often, and they hold our products for some time for no reason.” Recently, the scrutiny of cherries from other countries becomes a kind of guilt by association which envelops the Washington product.

Just before Chinese New Year 2021, a cherry importer was selling Chilean cherries in a wholesale market in Tianjin. “There were rumors saying that traces of the COVID-19 virus were found outside these cherry boxes. The rumor went viral on the online site Weibo, and sales evaporated. This incident made the entire industry very nervous.” Hu thinks the strained bilateral relationship between the United States and China is responsible for these anti-cherry actions.

Hu said he sees the writing on the Great Wall and that it’s time to diversify away from China, which at its peak was the largest overseas market for the Northwest cherry industry. “The whole industry is shifting to other markets including South Korea, Taiwan, Vietnam, Thailand, and Japan.” Even Cambodia is in the cherry-picked mix, and promotion dollars are being redirected to these countries as well as to Canada and Mexico.

Hu and others like him in the cherry export business have not permanently soured on China and were able to redirect products to other markets. As a result, no jobs were lost in US operations, but staffing in China was reduced by 25 percent. “China will continue to be a very important market for cherries, but we will not think of it as that important anymore.”

Hu and many of his friends think that if the two governments cannot agree on what kind of relationship they both want, the future will remain uncertain. “We don’t know how to go forward even if the tariffs get lifted,” he worries.

“When Biden was elected, we thought this would be good for us and the relationship. Now months later, we think not.”