Parts on airplanes wear out and break just like any other mechanical device. Where do airlines get their replacement parts? One source is Aventure Aviation of Atlanta, Georgia, serving airlines around the world including China, whose commercial airplane fleet is among the largest. Managing and growing the business has had its share of turbulence, according to its founding president Zaheer Faruqi, though he remains optimistic for the future of the company and the market in China.

The idea for the business goes back to his childhood in Pakistan. “On Sunday mornings my dad would ask me what I wanted to do, and I would request to go to the airport and watch airplanes take off and land,” he recalled. “Interest grew from there.”

He continued his love of airplanes into college, studying aviation at Northrop University in California and received a Bachelor of Science degree in aircraft maintenance engineering technology. Later, while working during the day in an aircraft engineering firm, he got a master’s degree in administration management. 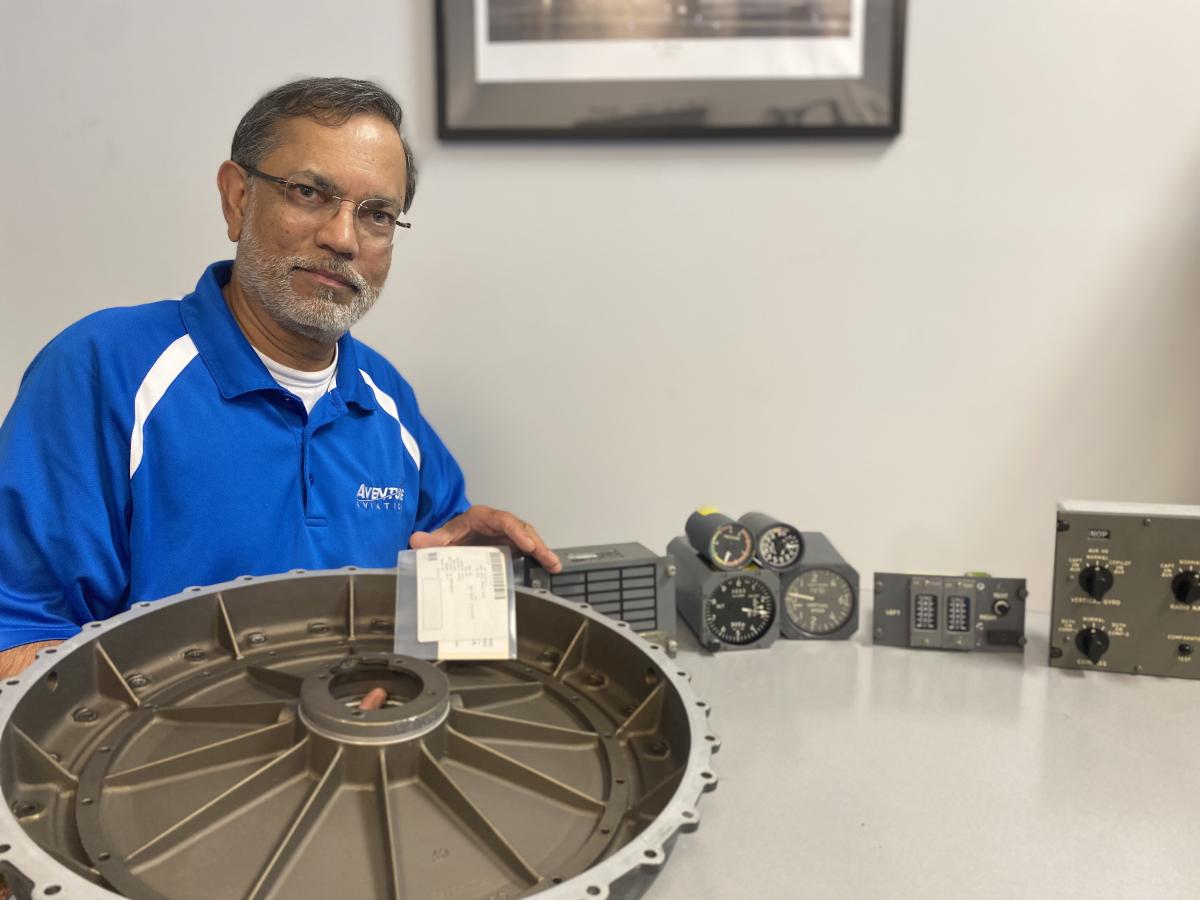 He started Aventure Aviation in 2001, and that’s when the real challenges began, with China not yet on the radar. The business plan was simple: every minute of every day there are airplanes flying somewhere in the world. These airplanes need affordable parts, and a business that can sell these parts and get them quickly to customers will do well. Quality refurbished parts from retired aircraft can do the trick.

What kinds of refurbished parts? The popular ones are parts that move and take abuse like landing gear, wheels, and brake systems. Auxiliary power units that provide electricity to airplanes parked on the ground are also popular. Of the retired airplanes he buys, each of which may have a million parts, only about 1,000 parts are worth salvaging and refurbishing for sale.

Does he ever sit in the passenger cabin on a flight for business and wonder who refurbished the parts on that particular aircraft? “If they’re mine, I’ll sleep like a baby.”

A world turned upside down

An unexpected challenge to the business and to him personally happened not long after the launch of his company. He was booked to fly on the morning of 9/11 when terrorists flew hijacked airliners into buildings and an empty field in Pennsylvania. “The authorities had to find someone. They had to find someone quickly, and they were looking for someone from my part of the world, of my religion, with an aviation background, and lots of stamps in his passports.”

“They came for me and asked where the rest of the guys were,” the recollection still unsettling after many years. They asked him about Al-Qaeda. He said, “Who is Al-Qaeda?” His neighbors noticed the official-looking sedans arriving in the neighborhood and sent cookies and cakes, wishing his family well. The FBI returned several times and his name got put on an airport watch list so his comings and goings could be monitored. “I respect all of these federal law enforcement agencies,” he said, “but this was really uncomfortable.”

They almost prevented him from boarding a flight once, but the captain intervened and let him board. “The captain admonished them, saying you can’t treat people like this.”

He had launched his company on the first day of September 2001 with a new website and company name: Axis. “We wanted to be at the center of things, connecting buyers and sellers.” Shortly after, President George W. Bush gave his “Axis of Evil” speech. There would be no “Axis” associated with the company after that. “I had to change the name and tear up all the new stationery,” he said ruefully.

Some years later, a representative of the Georgia Department of Economic Development approached him to ask why he wasn’t doing business in China. Georgia had an office in Shanghai. He said he didn’t know how. So, they took him on an official trade mission. They translated his business cards. “They put everything on a platter for me. Gave me a crash course in culture and business in China. They assigned me an interpreter.”

On a wing and a prayer

He took a lot of notes. In China he was told business would be hard because he wasn’t in the same time zone “and you don’t speak Chinese.” Undaunted, he returned to China four months later, hiring a Chinese graduate student to help him. “We had everything translated, and I hired someone in Beijing to help. Business took off and now we have 34 customers in China.”

At its height, China provided five percent of total sales. Seventy percent of Aventure’s business is outside the United States, but China offers the best prospect for the future, assuming there is one for him. A few years ago, business hit some turbulence.

Faruqi said the Civil Aviation Administration of China (CAAC) decided to ban buying used parts from American companies unless they are removed off a retired aircraft and refurbished by a CAAC-approved facility. “You must invite CAAC representatives to your facility every year, and they charge significant fees to go through the approval process. It has become very complicated and expensive.”

"Aviation is thriving. I’m placing my bets on China. It is a good place to do business.”

Why? “We were doing very well in China before about 2018 or 2019. Around that time, we started hearing from customers that a CAAC certification is now required for used parts.”

He said he bought an airplane from United Airlines that was being retired from the fleet. Typically, Faruqi strips the still-serviceable parts out of the airframe. China authorities asked him who took the parts off the airplane. He said that it was accomplished using an Aircraft Fleet Recycling Association (AFRA) accredited maintenance facility and technicians with everything done according to strict US government regulations. “The Chinese asked me if the technicians are Chinese. ‘No,’ I responded. My response wasn’t sufficient for them.”

He said the buyers and regulators know his quality is excellent. “If you came in with bags of money, I couldn’t sell you parts. I have to know a lot about the customer and their money before selling. I must know who the end user is for the parts and that the parts are not headed for a country on the US export control list of restricted countries.”

Chinese carriers operate dozens of Boeing 757s, which were last made in 2005. One airline in China has 40 such planes. China authorities prefer that new parts be used, but none are made anymore and finding new spares anywhere is tough to do. No parts supplier company has refurbished parts that were removed from a retired aircraft by a “CAAC approved maintenance facility” in the United States, according to Faruqi. The fallback is to provide used parts and go through an extra layer of CAAC ad hoc approval processes that can take three to six weeks. Either that or go through the annual CAAC inspection that results in higher costs for Aventure, more administrative burden for CAAC staff, and higher prices for their Chinese customers.

What really hurt the business was COVID-19. Travel restrictions and lockdowns grounded commercial aviation. No flights, no need for spare parts. Requests went from as many as 300 per day with some valued over $100,000 each to almost nothing.

“What should I do with my people during the downturn?” he lamented. He pivoted to sourcing personal protective equipment (PPE), including hand sanitizer, thermometers, and other equipment from China and selling it in the United States. That helped the company survive. Their best customer was a car dealership in Georgia whose salespeople gave the PPE away to customers. 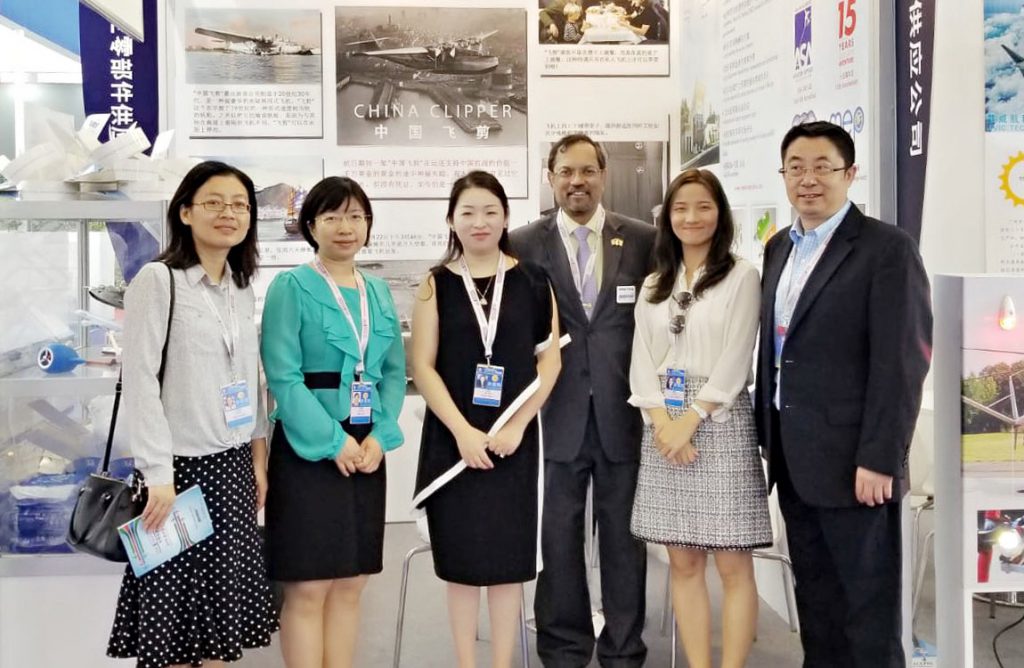 Meanwhile, he continues knocking on doors to resolve his China market access issues. He has met with his congressional representatives in Washington. “They threw their hands up. They took my story and passed it on to the State Department. I think I am one of very few people complaining about it. My rep has met with US Embassy people in Beijing. They took notes. No one has pounded the sidewalk saying help is on the way.”

“SMEs are reluctant to get involved in changing policy. They just change markets. But I need to be in China. I see an opportunity that is not going away. Aviation is thriving. I’m placing my bets on China. It is a good place to do business.”

“As long as China keeps flying those aircraft, then they will need spare parts.”

To illustrate, he points to growth in the number of airports, number of people flying and will be flying in the future as more people can afford to travel, the number of US and EU aircraft flying there and that are on order. “It is a goldmine,” echoing the eye-watering optimism that has drawn foreign businesspeople to China for the past 40 years. “The new aircraft going in there will age in a few years and the market for parts will go from $20 to $50 million a year.”

An alternative workaround to the access problem is working with Chinese airlines to create an alliance. He advises being patient, sympathizing with them. “Domestically, those companies would benefit from solving this problem. With better market access for imported refurbished parts, the Chinese airlines could be more competitive. CAAC has a good reputation for safety and administration. I am hopeful that through cooperation and negotiation with companies, a win-win solution can be found to change this policy and improve the operating environment for the Chinese airline industry at the same time.”

His local reps help navigate the problem. Some of his competitors have walked away from the market. He stayed and is now starting to see more inquiries.

Exporter of the year

His efforts have not gone unrecognized at home. In 2009, he won the Small Business Administration Exporter of the Year Award for the state of Georgia. His company competed with the winners from 13 states in the Southeast region and won that too. The Georgia governor called and offered to help. In November 2021, he received the E-Award from the US Department of Commerce, which is a presidential recognition for excellence in exporting.

Where possible, he networks with local business groups and state and federal resources such as the US Export-Import Bank and the US Commercial Service Export Assistance Center in Atlanta. He supports the work of the National Association of Chinese Americans based out of Atlanta. He serves on the board of World Trade Center Atlanta and the District Export Council in Atlanta. He’s also involved in the Hong Kong Association of Atlanta, so that geographical base with its important international air hub is covered too.

Faruqi believes the bilateral relationship will eventually improve. “China is a big country, and the airline business is increasing. My customers have gotten used to online ordering. They want orders filled quickly. People are flying freight across China using Western built aircraft.” Airbus and Boeing are the aircraft they support. “As long as China keeps flying those aircraft, then they will need spare parts,” he added hopefully.