China seemed like a national afterthought in the mid-1980s. America was the dominant world superpower and Japan was rising. China was just reviving after 150 years of international conflict and domestic turmoil.

Kimberly Kirkendall entered an international business program at Ohio State University. She was the first business major to minor in Chinese. “Everyone thought it was stupid to study Chinese,” she recalls. “There was no business in China at that time and it was during a recession.”

Already fluent in Spanish, she worried about finding herself looking for work in a recession. Japan was the hot business market then, but she reasoned that being a foreign woman would not be a competitive advantage there. She believed China was less formal than Japan, more accepting of women in business, and resembled her Midwest stomping grounds in “folksy culture.”

Things got circuitous from there. After a stretch at the Beijing Language Institute where she studied with mostly Eastern European students, her goal was to get a job in China. But a lot of foreign companies back then were reluctant to hire women for international placements in the belief they’d quit to have kids, she said. “I ended up doing German-China work in Germany, then briefly went back to the United States.”

Learning to be an adult in another culture

China appeared in her life again very quickly in the form of an American company on the east coast that had contracted with a joint venture (JV) in China to manufacture and import back to the United States. The JV partner in the United States was actually a Chinese government-owned company that set up shop in Connecticut. That was how China tested the JV model. Kirkendall worked for the US customer of the JV and had responsibility for overseeing factories in China, even though her company did not have any ownership. Kirkendall, still a young adult, managed an office in Shanghai with a full Chinese team and two factories in the countryside. “I learned how to be a Chinese adult rather than an American adult. Your brain gets wired in your early 20s. Chinese language is contextual; reading body language, motivation, intention, non-verbal cues is critical. I learned to be a manager in China. When I went back to the United States, I had to learn to manage like an American.”

After a few years on the west coast she returned to Ohio, finding work at a group of catalogue companies where she managed a team in purchasing and fulfillment. During this time, she had three kids and realized she needed a technical skill that wasn’t China-focused. So, she got a CPA and worked for a regional accounting firm doing some consulting while learning how to do tax returns, audits, and company valuations. One of their clients hired her to be CFO.

"These are ‘James Bond’ projects, creative solutions to get problems solved.”

“While CFO, I would get calls from other companies saying they needed an interim CFO and I eventually started my business. During that time a company called me. They were starting a factory in China. They were going to use EY, but they came to me because they knew I ran factories in China.”

She started her own company offering both “rent-a-CFO” and China setup services, but quickly China consulting took over. The first 10 years were focused on setting up plants in China and supply chain management issues. Then from “2010 to 2020 we had more clients who wanted to grow sales and distribution. Last five years were ‘oh s***’ projects with lots of challenges, especially during COVID-19.”

During the pandemic, many companies were struggling to manage the shifts in supply chain. They were moving orders from India to China, from China to Vietnam, from supplier to supplier. Many Chinese factories would get new clients, but then the clients’ long-term factories opened back up again and they would cancel orders. This caused many factories to struggle with cashflow, obsolete inventory, and trust issues, impacting their US customers. Kirkendall has been busy helping clients improve their supply chain systems. But it wasn’t all problems; some clients had opportunities as well. One US client sold their China factory for over five times its value, just for the lease on the land. Kirkendall led them through closing the factory operations, including terminating over 200 workers and collecting on the sale of the business.

She also has some Chinese clients in the United States. “One Chinese guy got caught up in an MIT partnership and was sued by his American partner for IP that the Chinese guy owned. He lost in court in Texas. I got pulled in after that and helped negotiate the judgment down from $6 million to a more reasonable amount – a little over $1 million. Then he had to get the money out of China. You have to get creative to get money out of China. These are ‘James Bond’ projects, creative solutions to get problems solved.”

Are there any creative solutions for the fraught US-China relationship? “China is my mother, and the US is my father and I just want them to get along,” she analogized with a laugh. Which is why the current hostile climate is so concerning. “This is a seismic shift larger than any other time I have seen. But it isn’t as dire as it is painted in the media. We need China and China needs us.” 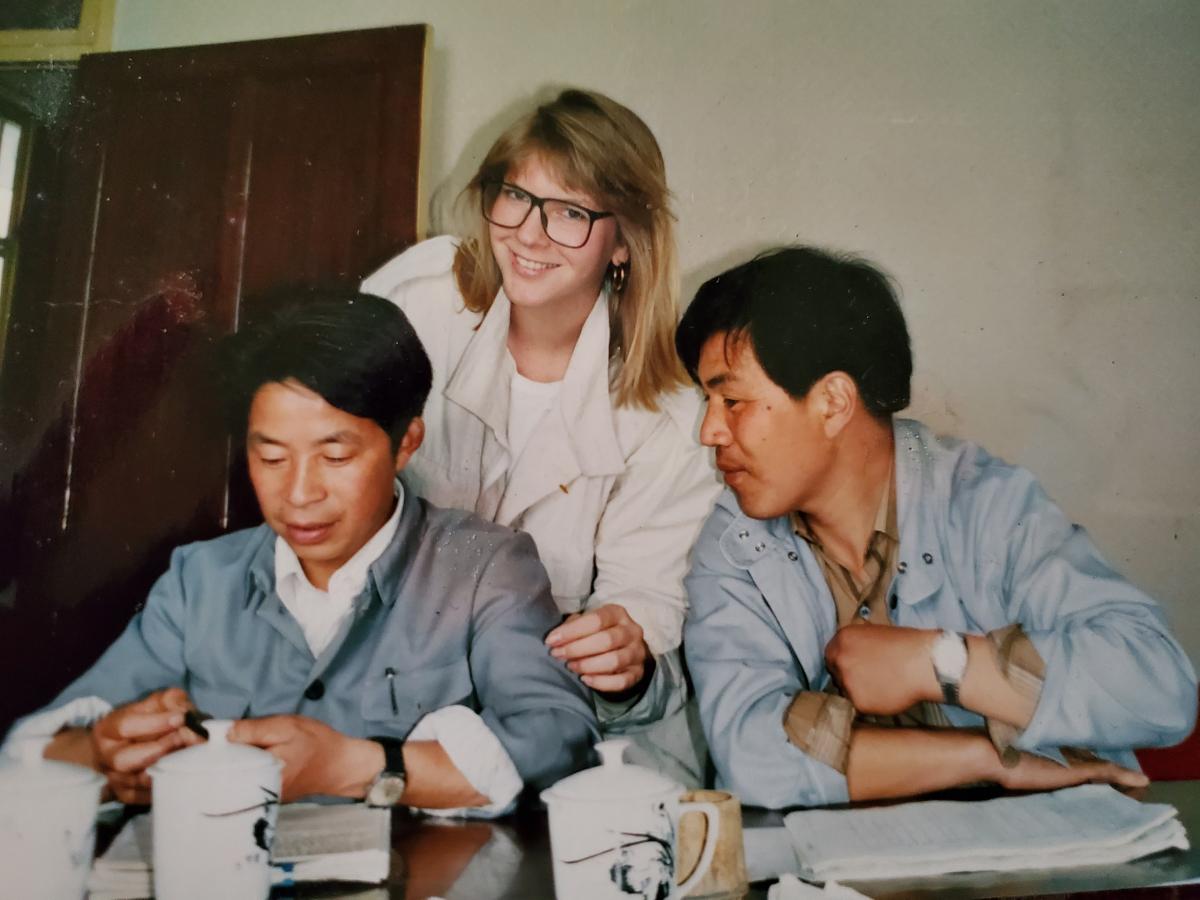 When Kirkendall began her career in China the government owned everything, there was no foreign investment, and the country was exploring opening up. She lived in China from 1986 through 1991, during and after Tiananmen. She was in Shanghai in June 1989, and she stayed after to complete her contract for six months before moving to Hong Kong. With this long lens on China’s development, she often has a different opinion about what motivates their government’s actions that is out of step with many other Americans. For example, as China opened up in the early 2000’s, people would tell her “that old-school China no longer existed in modern China. They told me that my knowledge and experience was no longer relevant.” Kirkendall recognized that Chinese business was tied to local government, similar to how it is in Germany and many other countries. But typically Americans expected a US style approach where the government would be hands off. While many US companies that owned a business in China knew having a good relationship with the local government was critical, many other US businesses used the “hands off” model to approach the China market.

So when China appeared to pivot in the last five years from a hard drive to capitalism and open markets to more government control, many of those same people who called her “old school” were shocked to see so much government involvement in business. Companies like Didi, Alibaba, and others were reined in by government officials. She argues that shock comes from people who placed their bets that a capitalist economy meant a change in politics. “When it didn’t and hasn’t changed, they felt foolish. They don’t want to say they misread the situation. They want to say they were misled. But really people were reading the situation they wanted to read.”  Misreading the situation might apply to leaders of both countries. Kirkendall thinks it unlikely that it will lead to disaster, but expects there will continue to be tension. “The United States doesn’t want to share the stage. It is very human and natural behavior to hold onto your position. I’m not criticizing that.” Doesn’t China want the stage that the United States has occupied for so long? “I don’t think they want to be a world power in the same way. China wants to be respected and to secure resources. It’s less interested in enforcing their system on others and certainly not managing (other countries).” She went on to say that China traditionally prefers their own culture, language, food, and civilization too much to want to colonize other countries. Historically they have had border disagreements, but not gone into other regions to set up governments. She believes they typically engage with commercial means over political means.

Kirkendall talked about the period around China’s accession to the WTO, during which she believes they were moving towards meeting international expectations. Until the global financial crisis in 2008 gave them pause. Before then, China was working to meet its WTO membership requirements, moving towards financial reform and opening currency markets. “When the recession hit, their leaders concluded that ‘if this is what deregulation looks like, we need to find a better way!’ It was too much financial chaos. They had to maintain the mandate of heaven, which values stable improvement. They backed off on the reforms to deregulate the financial systems. They needed to have a certain amount of control over the economy to ensure stability.”

“The labels are extreme, either you are a pro-China mouthpiece of the Communist Party, or you hate China. The truth is usually in the middle, but it is getting harder to walk the middle. I try.”

She believes the 2008 market crash contributed to the Belt and Road Initiative, a project to provide loans to countries to encourage trade with China and develop infrastructure to facilitate such trade. The recession hit China hard, and “China’s leadership reasoned that they needed to diversify. Any company that depends on one customer for 70 percent of sales is facing a huge risk. So, for example, they started building ports in Brazil to buy soybeans.” China needed to diversify their customer and supplier base and be less reliant on the west, and the Belt and Road Initiative was a part of that policy.

Both the United States and China can be myopic when talking of economic self-sufficiency. She believes it will be impossible to decouple. “Who will take those manufacturing jobs if they are returned to the United States?” she recounted asking a group of students. Many of her clients in the United States struggle to find labor, so increasing manufacturing here could be difficult. Similarly, China is mistaken if it thinks it can produce everything it now imports. “China has opened tremendously during the last 50 years, and I don’t see it closing trade and economic relations with the US or any other country, as they are a resource poor country and will continue to need imports.”

One of the things that bothers her most is the extreme positions people in the United States take when it comes to China. She says in the last few years, opinions have shifted into two camps. “The labels are extreme, either you are a pro-China mouthpiece of the Communist Party, or you hate China. The truth is usually in the middle, but it is getting harder to walk the middle. I try.” Her efforts to bring balance to the conversation include lectures on college campuses or to trade groups, and posts on LinkedIn. “I want people to think critically. I tell students that the policy of the US government has been to contain China. I ask students to flip that. If China or Russia were saying their goal is to contain the US, how would you feel?” It’s important to understand the other side of any argument, she believes. She says challenging our own perspective is largely missing from official discourse, and she’s constantly amazed by the fuzzy thinking she confronts.

“When I visited my parents, my dad’s golf buddy would tell me his goal was to put me out of business, because he thought I was sending jobs to China.” She feels that cross-border trade benefits everyone in the end. She is proud to have contributed to the growth and success of her US clients. Many US businesses have thrived over the last two decades because of the opportunities in China, and she believes there are still opportunities. The next few years will be very interesting.