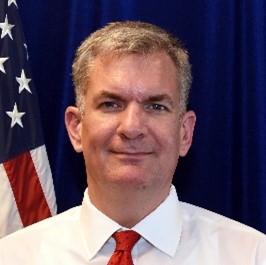 Chris Allison leads the political and economic section at the U.S. Consulate General in Shanghai, China.  Prior to his arrival in Shanghai, he was a member of the Secretary of State’s Policy Planning Staff (S/P) at the U.S. Department of State, where his work focused on environmental issues, economic policy, and U.S. relations with countries in the Western Hemisphere.  He also served as the Deputy Director of the Office of Global Change in the Bureau of Oceans and International Environmental and Scientific Affairs (OES), leading U.S. engagement in multilateral negotiations to address climate change and overseeing foreign assistance programs to advance U.S. climate policy goals.  Prior to joining OES, Chris spent four years at U.S. Embassy Beijing, first working on U.S.-China trade issues and later as the Counselor for Environment, Science, Technology, and Health, where he played a key role in negotiations leading to the 2014 U.S.-China Joint Announcement on Climate Change.  He has also served at the U.S. Embassy in Tokyo, Japan and the U.S. Consulate General in Chennai, India, as well as in variety of offices at the Department of State in Washington, DC.  On his first tour, Chris received the American Foreign Service Association’s Averell Harriman Award for constructive dissent by a junior officer, for advocating policy changes to processing of H-1B temporary worker visas.  Chris is a graduate of St. John’s College in Santa Fe, New Mexico, and holds a master’s degree in international relations from the Maxwell School at Syracuse University.  He is joined in Shanghai by his wife, Beth Rollins, and their sons Max and Henry.