Standards serve as the building blocks for product development and help ensure functionality, interoperability, and safety. Standards provide many benefits to consumers and society overall, allowing products like credit cards, phones, and computers to work across different countries and providing the foundation for the internet and world wide web, enabling global communication and exchange of information.

The degree of alignment between standards and the technical specifications of a company’s technology can also determine how effectively companies can commercialize new technologies and access markets. The Chinese government recognizes standards as an important component for international industrial competitiveness. China has made it a priority to become more influential in the bodies that set international standards and its participation in international standards-setting organizations (SSOs) has increased dramatically in recent years.

The voluntary, market-driven, consensus-based standardization system works well for US interests and should be maintained. Constructive participation by Chinese stakeholders is also important for US companies and consumers. China is both the largest producer of goods exported across the world and a huge market for imported goods and international investment, so Chinese input is crucial for ensuring product interoperability. International SSOs are the most level playing field for standardization that exists, so it is preferable to have technical debates with Chinese counterparts there than in Chinese domestic SSOs where due process is often weaker.

Some steps that the US government can take to support US leadership in international standards include support for industry participation and funding continuity for US government technical experts to participate. It is also critical to clarify that the entity list does not apply to standards setting activities, which has handicapped US participation in some organizations and encouraged China to create home-grown alternatives to some international standards.

These policies reflect a two-pronged strategy to increase China’s standards influence globally—by strengthening its sway in international SSOs and encouraging other countries to adopt Chinese standards.

On October 10, the general offices of the Communist Party of China Central Committee and the State Council issued an outline for the next stage of China’s standards setting strategy covering the period through 2035. The outline is the product of a multi-year research process that began in 2018 with “China Standards 2035,” a research program led by the Chinese Academy of Engineering that concluded in 2020.

This reflects a view of standards not only enabling interoperability but also promoting innovation by allowing companies to build upon established practices rather than devoting resources to establish their own. While prioritizing certain technologies can help focus resources, by promoting some technologies over others, especially in emerging technologies that are not yet mature enough for standardization, the Chinese government runs the risk of hampering innovation by limiting companies’ flexibility to experiment with alternate technologies or by limiting competition among different industry standards.

In line with China’s standards policy goals, China’s participation in multilateral standards-setting institutions as well as multi-stakeholder industry consortia has increased dramatically. While over the past decade China has had very high participation rates in the ISO and the International Electrotechnical Commission (IEC), two of the largest multilateral SSOs, it has taken a much greater leadership role in standards-drafting technical committees in recent years. Those in a leadership capacity are able to influence the agenda, how conversations are structured, and how time is allocated. 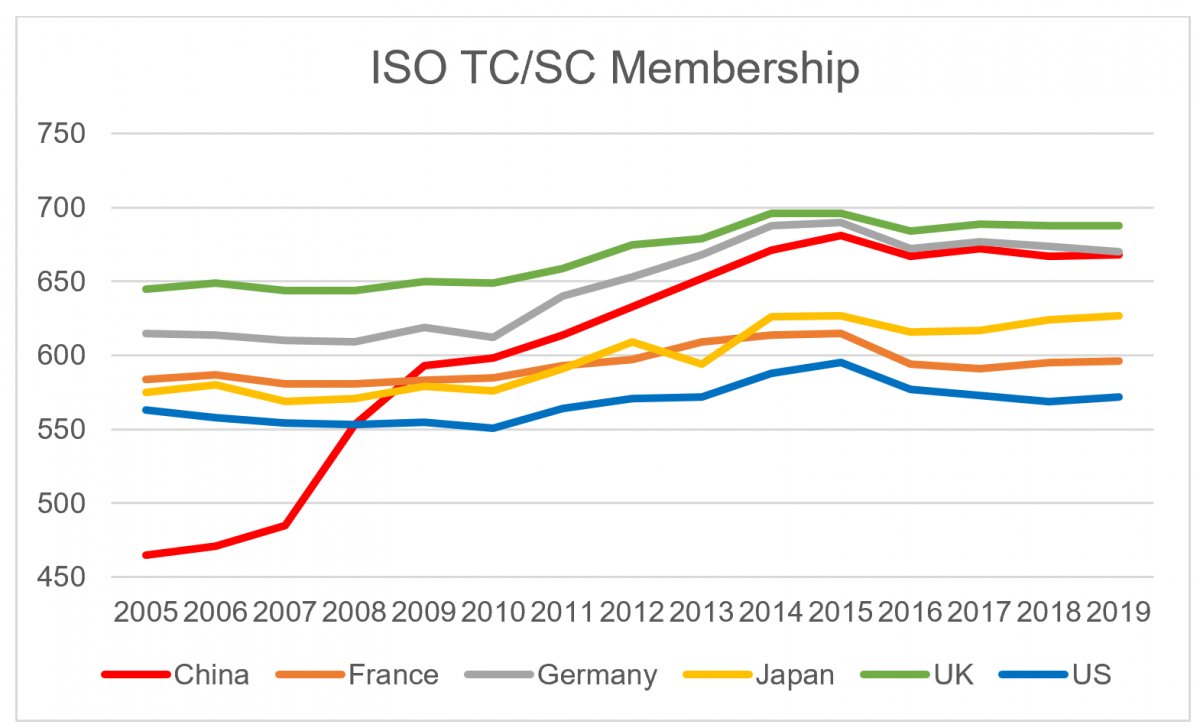 From 2011 to 2021, the number of Chinese-occupied secretariat positions in technical committees (TCs) or subcommittees (SCs) increased by 58 percent in ISO. In IEC, they increased 67 percent from 2012 to 2020. The number of secretariat positions occupied by other major participants like the United States, Germany, and Japan in both organizations remained relatively flat over these time periods.

Project (3GPP), the multi-stakeholder body responsible for 5G standards setting, have more than doubled in recent years to 139 in December 2021, more than twice the 58 US voting members.

Tracking the volume of participants on a country-by-country basis gives an indication of how much each country is investing into standards participation, but it provides no information about the return on that investment. Determining any individual nation’s influence over a standardization process requires measuring outcomes in the marketplace, not merely participation or inputs.

Due to COVID-19 concerns, many standardization activities have become virtual since early 2020. In many cases, this has allowed them to be more inclusive since participation does not require travel and is less resource intensive. However, the logistics of video meetings have also made it more difficult to reach consensus. Based on conversations with member companies, the virtual environment has not significantly changed China’s level of influence in international standards setting since it remains bound by effective due process and governance practices.

As both the largest producer of goods exported across the world and a massive market for imported goods and international investment, China’s robust input in international standards is critical to ensure the creation of balanced, comprehensive standards that serve industry needs.

China’s standards policies can amplify the market-distorting effects of its broader industrial policies like Made in China 2025, which provide disproportionate government support for Chinese companies in an effort to create globally competitive national champions. While companies from all countries participate in standards-setting to gain a competitive advantage, the level of government involvement and policy support in China is unique, especially when juxtaposed with countries like the United States where standardization activities are grassroots-driven and industry-led.

While some Chinese government support is constructive, such as training programs focused on dueprocess and expectations for technical review of their proposals, other methods are more concerning. For example, local governments across China provide financial incentives for companies to set standards, and compensation is often highest for companies involved in setting international standards. China’s 2035 standards outline continues to encourage rewards for drafting technical standards. It also promotes strengthened government support for financing, credit, talent, and policy coordination and using funds to guide private capital to support standardization work.

Subsidies for standards setting distort the standardization environment since they incentivize drafting standards for standards’ sake rather than being driven by market need. This is likely a contributing factor to the large numbers of low-quality Chinese standards proposals in international SSOs that some participants have reported. Large numbers of low-quality proposals gum up international standards-setting and take time and resources away from evaluating technically sound proposals. However, rules supporting consensus-based standards make it difficult for a single participant to push through low-quality proposals or exclude other participants. In SSOs with strong governance practices, a large number of proposals does not necessarily translate to influence.

Another concern is that Chinese stakeholders are sometimes pressured into voting as a bloc on proposals that would advance Chinese industrial policy goals for strategic industries even if such proposals are contrary to worldwide standards optimization. While it is not uncommon for international standards setting to involve coalition building, this is typically industry-led rather than coordinated around a government’s industrial policy goals. However, much of this concern is driven by a handful of alarming anecdotes that are not representative, and most organizations have sufficient checks in place to prevent abuses. Divisive standards proposals are the exception rather than the norm, and participants typically reach consensus on most standards proposals without even requiring a vote.

While leadership positions in international SSOs can be influential, strong governance practices make it extremely difficult in most organizations to leverage these positions to force through certain proposals without consensus or block proposals.

Voluntary, open, market-driven, consensus-based standards setting serves the interests of US companies. The US government should continue to support industry-led standards setting. At the same time, it should also continue supporting China’s participation in international standards setting, which is crucial to ensure interoperability of products from the United States, China, and the rest of the world.

There are some important steps that the US government can take to support US leadership in international standards: