Chinese Investment in the US:  2017 Mid-Year Analysis

Based on data from the first half of the year, 2017 appears to be on track to continue at the high level of Chinese investment in the US that was seen in 2016, according to a recent briefing by Rhodium Group, though much of that so far has consisted of carry over deals from last year. The Commerce Department’s SelectUSA program, which aims to attract foreign investment to the US, will be held during the week of June 18, potentially adding further deals to the second half of the year.

Chinese investment in the United States reached new heights last year, tripling total Chinese investments from 2015 and making 2016 the year with the most inbound Chinese investment to date. Chinese foreign direct investment (FDI) peaked at over $45 billion dollars, with unprecedented growth in electronics, transport and infrastructure, real estate and hospitality, and entertainment. 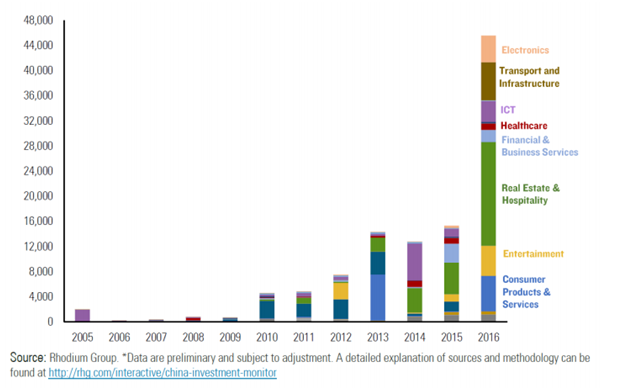 Despite this enormous growth in investment, Chinese FDI has become increasingly politicized in Washington, DC over the last year, even as it remains popular at the state and local level. Critics in Washington point to Chinese investment in sectors claimed to undermine US national security or economic interests, particularly if the investor is a state-owned enterprise.

Current significant Chinese takeovers of American companies before the US Committee on Foreign Invest (CFIUS), include cases such as Lattice Semiconductor Corp and MoneyGram International Inc. Each of these deals would involve access and/or rights to information which may present a security concern--including potential military application and sensitive personal financial information respectively in the cases listed above. Zhongwang USA LLC also presents an interesting case, as a Chinese-owned company filing to acquire an American aluminum company--currently a sensitive industry between the two nations. Zhongwang withdrew its case from CFIUS last year, but refiled in May 2017 after addressing cited security concerns. In June, more than two dozen lawmakers signed a letter urging Treasury Secretary Mnuchin to reject the proposed sale.

Under US law, CFIUS weighs national security aspects of transactions that could result in control of a US business by a foreign person. While there has been a significant increase in the number of transactions considered by CFIUS in recent years, most transactions are ultimately approved, although several high profile acquisitions by Chinese companies have been rejected, withdrawn, or discouraged (such as, most recently, a potential Chinese bid for Westinghouse Electric).

There are now several proposals under development in Congress to modify CFIUS reviews, including the possible addition of new review considerations, such as economic security, or increasing the committee’s jurisdiction to review cases by making review mandatory or including greenfield investments.

While there are some concerns in Washington about Chinese investments in the United States, state and local communities have seen benefits from the new investors. In 2016, Chinese-owned companies expanded to nearly every congressional district in the United States--425 out of 435 Congressional Districts, or 98 percent, according to Rhodium Group’s New Neighbors report, done on behalf of the National Committee on US-China Relations. This investment provides direct, full-time employment for more than 140,000 Americans, a more than 50 percent increase from 2015.

At USCBC’s Annual Membership Meeting conference on June 6, Treasury Secretary Steven Mnuchin said he favors keeping CFIUS focused on national security rather than expanding the review to include economic concerns. He did acknowledge that legislation is being developed to address various “technical” issues in the CFIUS process.

Being there: American researchers extol benefits of returning to China | SCMP | 11/28/2022

China meets with US firms including ExxonMobil, Boeing and Cargill as it seeks to restore market confidence | SCMP | 11/21/2022