Chinese investment totaled $29 billion in 2017-- a 35 percent decline from 2016, and a 90 percent decline in new investment, according to Rhodium Group. However, 2017 remains the second-largest year for Chinese FDI in the US. In addition, Chinese outward investment globally still increased modestly last year, in large part due to the $43-billion acquisition of Swiss agro-tech giant Syngenta. 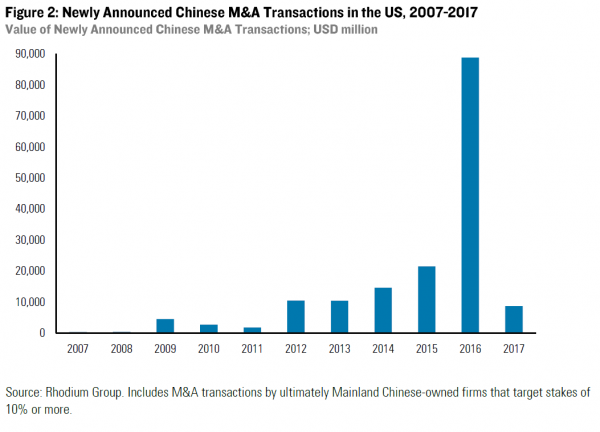 The biggest driver in this decline was a late-2016 change in Chinese policy, which restricted large-scale outward investment. This included restrictions on real estate and hospitality investments, which had previously comprised a significant portion (36%) of Chinese FDI in the US. The change not only affected new deals, but also prevented some planned transactions from being completed, such as Wanda’s $1 billion acquisition of Dick Clark Productions as a result of a crack down on the entertainment industry.

In mid-February 2018, China updated its list of sensitive areas for outbound investment to include news media and weapons development.

Graphic source: American Enterprise Institute, “Chinese Investments in the US”

CFIUS reviews in 2017
At the same time, the US foreign investment regulator, the Committee on Foreign Investment in the US (CFIUS) also increased scrutiny of deals in 2017, and public debate began on reforming the committee to expand its review purview. A decade ago, only 4 percent of cases brought to CFIUS underwent an investigation; in 2017, that number was up to 70 percent, according to Assistant Secretary of the Treasury Heath Tarbert in a recent hearing. Several investment deals were blocked or abandoned this year as a result of CFIUS review, with the most high-profile being the unsuccessful attempt by Alibaba subsidiary Ant Financial to purchase US-owned Moneygram.

Despite an increasingly restrictive environment, in December CFIUS approved Beijing-based Naura Microelectronics Equipment Co Ltd to buy Akrion System LLC, a US semiconductor manufacturing equipment company--possibly the first approval by the Trump administration of a Chinese acquisition of a US technology company. Details of CFIUS reviews are confidential, so it is not clear if other transactions may also have been approved in 2017.

Legislation to reform CFIUS was proposed in November, and would include measures to respond to what some lawmakers see as an evolving national security threat posed by certain kinds of investment, particularly from China. The proposed legislation would expand CFIUS’ jurisdiction in various ways, including allowing the committee to review minority investments when the investments involve “critical technology,” which is loosely defined.