Please see the PDF or SlideShare for the full version of the report including notations and appendixes.

Transparency—the openness of government decision-making, the public availability of information, and the solicitation of broad public feedback during the drafting of new laws and regulations—is consistently cited as a top concern in the US-China Business Council’s (USCBC) annual membership survey on China’s business environment. To measure the transparency of China’s lawmaking process, USCBC conducts an annual review of how select PRC government agencies comply with commitments to soliciting public feedback. In particular, all of China’s economic and trade-related central government agencies have agreed to public comment periods of at least 30 days on draft laws, administrative regulations, departmental rules, and regulations that function as regulations and rules. For the fifth straight year, USCBC has found that China’s central government agencies have an inconsistent record and are not fully meeting their regulatory transparency obligations.

These obligations include high-level commitments by the National People’s Congress (NPC), China’s legislature, and the State Council, the equivalent of the US cabinet. In 2008, the NPC agreed to solicit public comments on most draft laws and amendments. In 2008, 2011, and again in 2012, the State Council pledged during bilateral dialogues with the United States to release drafts of all economic and trade-related administrative regulations and departmental rules for at least a 30-day public comment period.

One challenge in tracking transparency is the lack of clarity about which regulations fall under China’s commitments. USCBC’s report uses two filters for determining what policy documents to include in the report: a “narrow” interpretation that includes document types explicitly labeled as administrative regulations or departmental rules (known in this report as “narrow regulatory documents”), and a “broad” interpretation that includes other documents that have a clear economic regulatory impact (known in this report as “broad regulatory documents”).

This year’s report, covering the period from January to December 2014, reveals that compliance remains far below China’s commitments for nearly all government entities. Only China’s State Council showed a notable improvement this year, but it is unclear if this is the start of a dedicated and positive trend, or a one-off result.  Major findings of the report include:

USCBC recommends that the Chinese government ensures that all administrative regulations, departmental rules, and regulatory documents are posted on the designated SCLAO information website comment page for at least a 30-day period, as per China’s bilateral commitments and domestic laws and regulations. China should take a further step by permitting a longer comment period of 60 or 90 days, which would allow for higher-quality comment contributions. Finally, lawmakers should define and clarify what types of documents are covered under the State Council’s transparency commitments, making sure to include catalogues, measures, standards, and opinions, all of which can impact industry significantly. 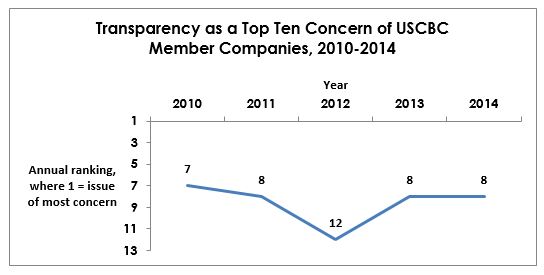 Regulatory transparency—the openness of government decision-making, the public availability of information, and the solicitation of broad public feedback during the drafting of new laws and regulations—remains a top concern of US-China Business Council (USCBC) member companies operating in China. In USCBC’s 2014 annual membership survey, transparency ranked as the number eight business challenge (see graph), above national treatment and below licensing.

Since 2009, USCBC has monitored and tracked the drafting and release of economic- and trade-related laws, departmental rules, administrative regulations, and other regulatory documents to determine whether they have been posted for at least a 30-day public comment period on the websites of the National People’s Congress (NPC), the State Council Legislative Affairs Office (SCLAO), and other relevant government agencies. Following the collection of these data, USCBC publishes an annual report summarizing and analyzing the results. This is the seventh report USCBC has published on China’s regulatory transparency, and covers the 12-month period from January to December 2014.

For the fifth consecutive year, USCBC has found that China’s National People’s Congress, State Council, and other central government agencies are not fully meeting their regulatory transparency obligations.

This 2014 transparency scorecard reflects ongoing USCBC efforts to monitor and track all economic and trade-related laws, amendments, administrative regulations, departmental rules, and regulatory documents drafted and issued by the NPC, the State Council (including SCLAO), and government agencies responsible for regulating trade and the economy. USCBC also tracks the activities of key subsidiary agencies such as the National Energy Administration (NEA), which is under the purview of the National Development and Reform Commission (NDRC). The agencies tracked are:

During 2014, USCBC conducted regular and detailed monitoring of the individual Chinese-language agency websites and of major Chinese-language media websites to compile data for this report. To ensure that the report captured all documents that served in an economic and trade-related regulatory capacity, USCBC reviewed each document released by these agencies to determine their direct or indirect regulatory impact on businesses in China. USCBC’s research also tallied whether each of these documents was ever open for public comment, during this or any previous tracking period.

What qualifies as a regulatory document is even less clear. In the Opinions of the State Council on Strengthening the Construction of a Law-based Government, no guidance is given on how to identify a regulatory document, with the Opinions saying only that regulatory documents with a “direct influence on rights and obligations of citizens, legal persons or other organizations, public comments shall be solicited.” No further guidance is given on what “direct influence” is, or on how to define the rights, obligations, and scope of public comments.

For the purposes of this report, USCBC has divided rules and regulations into two separate categories:

For categories of administrative regulations, departmental rules, and regulatory documents along with a full list of the types of documents included under these categories, see Appendix 1.

This year’s figure marks a three-year low for NPC. Before 2011, NPC consistently opened draft laws for at least a 30-day comment period at least once during the standard three review rounds by NPC Standing Committee. As these laws have considerable regulatory weight across China, USCBC encourages NPC to return to its previously consistent high marks.

The State Council (including SCLAO) and its cabinet-level government agencies’ commitment to regulatory transparency remain insufficient. USCBC tracked 673 broad regulatory documents released by the State Council and seven priority government agencies in 2014. However, only 119 of these (17.7 percent) were open for public comment at any point on either SCLAO or the respective agency website. Though USCBC analysis shows that these numbers are an improvement from past years, these agencies still have a poor record of compliance with China’s transparency commitments.

Among the small number of broad regulatory documents from any entity (6.1 percent) that were listed on the SCLAO website for public comment, the majority (46 of 52, or 88.5 percent) were posted for at least 30 days, in full compliance with China’s commitments. On average, regulatory documents posted to the SCLAO website were open for public comment for at least 28 days.

The record was less positive for broad regulatory documents posted only to agency websites, however. Only 25 of 67 or 37.3 percent of those policies were posted for at least 30 days, and these policies had an average comment period of fewer than 20 days (see table 3 below). This is a drop from last year’s average of 24 days. The length of comment periods varies significantly, ranging from as few as four days to as many as 94. For methodology and resources, see Appendix 2.

Tracking the State Council and selected agencies’ regulatory transparency record is a challenging process. Chinese commitments—including bilateral agreements—do not define key terms such as “trade- and economic-related,” “administrative regulations and departmental rules,” “regulatory documents,” “public opinions,” or “direct influence on the “rights and obligations of citizens, legal persons, or other organizations.” The ambiguous terminology has led to multiple interpretations of the commitments and multiple methods for measuring compliance. It also results in uneven commitment among Chinese regulatory agencies. All of these factors make it difficult to identify readily which regulations fall under these commitments, resulting in the need to track both broad and narrow definitions of what may qualify.

SCLAO’s April 2012 Interim Measures on Solicitation of Public Comments on Draft Laws and Regulations states that draft regulations should “generally” be released for public comment for no fewer than 30 days (Article 6), but exempts “emergency or special circumstances” as well as “draft administrative regulations involving state secrets, national security, the exchange rate, and monetary policy that are not suitable for public comment” (Article 3). Some regulations may fall into these exempted categories, but they are unlikely to cover all of the unreleased regulatory documents USCBC identified in 2014. SCLAO’s 2012 measures do not provide clarification on the scope and definition of these exceptions. Additionally, regulations that legally may be exempt from these requirements generally do not state clearly that they are invoking these exemptions.

Additionally, after an administrative item is posted for public comment on an agency website, some agencies later remove the link to the original policy. Verifying the publication date, implementation date, and content of the policy must therefore be done through detailed Chinese-language media searches, making it challenging to confirm that a policy was indeed listed for the full period on the agency website.

Some administrative items, including amendments to laws and draft regulations, may include rounds of comment that are not open to the public, but in which officials circulate drafts to select stakeholders in government, industry, and academia. In these cases, the comment periods can vary in length and may last only a few days. This manner of solicitation does not meet Chinese government transparency commitments and limits the perspectives the Chinese government receives. To qualify as “public comment,” government agencies must include all industry stakeholders, including foreign companies, allowing them to provide an accurate assessment of the impact policies may have —as well as constructive feedback.

In the absence of a centrally maintained public record of items released for comment in China, the only way to verify whether laws and regulations are published for public comment is to check each relevant agency website regularly for the release of new documents. Although all the agencies tracked have a specific page for administrative items open for public comment, other regulatory documents not open for public comment are scattered across different locations on each agency’s website. While some draft items may be released for comment to ministry websites only, it is challenging to track new regulations if they are neither posted to the SCLAO site nor receive coverage in the Chinese media. This makes it nearly impossible for transparency to be tracked comprehensively, without a significant time commitment.

It is important to note that these challenges are simply for tracking and evaluating China’s compliance with its transparency commitments. The burden for companies seeking to ensure that they are in compliance with relevant laws and regulations is even heavier, since in addition to identifying the policies, companies must then assess what the potential impact of the released policies may be on their businesses. For policies that are only publicly released after implementation, companies may have little time to determine how to comply with new policies and procedures that their regulators have issued.

The process of releasing policies for public comment is not the end goal, but a means for developing effective policy. More voices help inform policymakers about the possible impacts of policy measures. In addition to improving the effectiveness of policies, regulatory transparency improves government accountability and governance, both stated goals of last year’s Fourth Plenum of the 18th Chinese Communist Party Congress. Indeed, the Chinese Academy of Social Sciences issues an annual report on the transparency of ministries under the State Council, as well as provincial governments (see Appendix 3d).

The PRC government continues to voice its commitment to transparency through various statements and regulations, despite generally poor compliance with past transparency commitments. Some recent developments regarding regulatory transparency include: