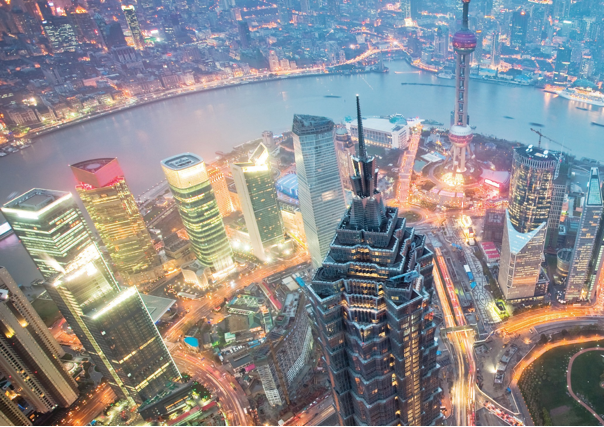 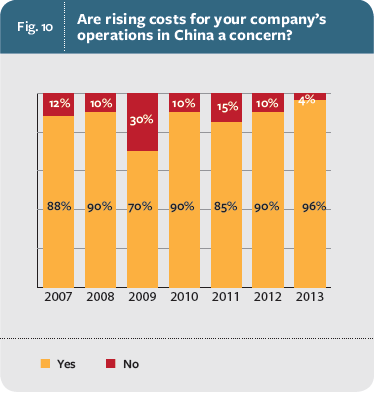 Rising costs have been a concern in China for many years, but this year’s survey suggests that the increases may have outpaced company expectations of tolerable expense increases. This is the first time rising costs have ranked number one in USCBC’s survey and it is the only issue characterized as having “deteriorated” over the last year. 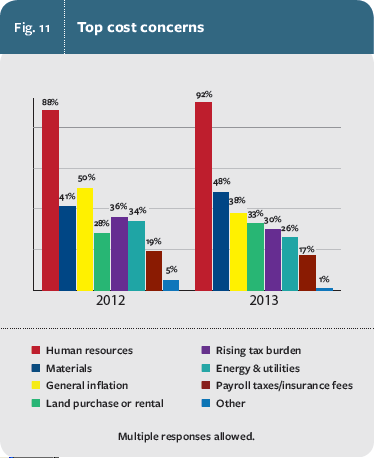 The vast majority of respondents have expressed concern about rising costs since the question was first asked in 2007. Only in 2009 as the global recession was at its height and wage pressures eased did that number dip below 80 percent (Fig. 10).
Human resources costs have consistently been the specific cost of most concern, reaching 92 percent in this year’s survey; a further discussion of those issues can be found under human resources (#3). Concerns about materials and land costs also increased this year; concerns in all other areas decreased (Fig. 11).

Competition with Chinese Companies in China 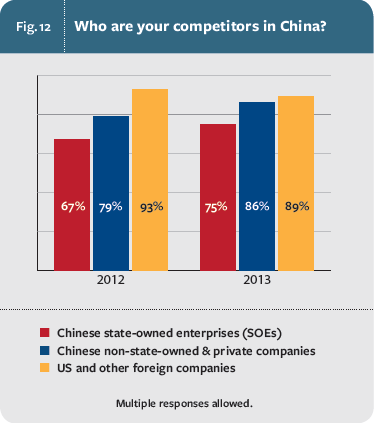 As has been the case in past USCBC surveys, most companies report that they have a variety of competitors in China, including Chinese state-owned enterprises (75 percent), Chinese non-state-owned and private companies (86 percent), and US and other foreign companies (89 percent)(Fig. 12).

In short, the discriminatory treatment problem is not just an SOE problem. It is a problem of Chinese companies versus foreign and foreign-invested companies.Over the past three years, survey respondents have consistently named preferential government financing and preferential licensing and approvals as the areas in which they are seeing Chinese companies—state-owned and private—receive benefits their companies cannot.In addition to preferential access to government contracts, also consistently cited by survey respondents, this year companies indicated that their Chinese competitors received tax benefits that they cannot (Fig. 15). 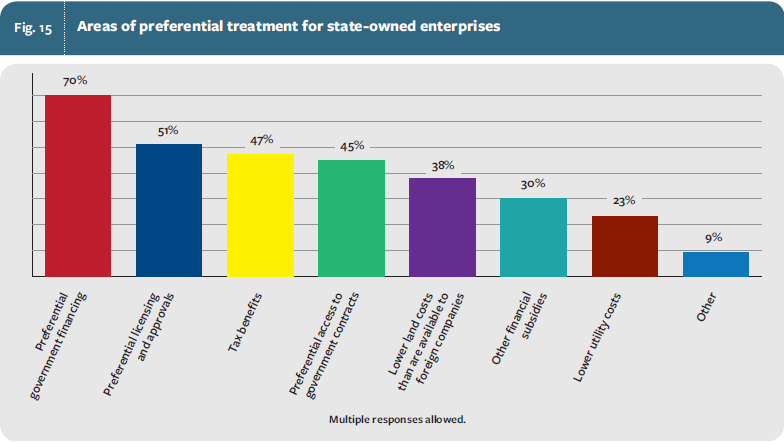 Addressing concerns about an unlevel competitive playing field provides a good example of the vital importance of solutions that focus on the right problems. Focusing simply on state ownership misses the similar benefits that many non-SOE companies also receive.

Administrative licensing—which refers to the array of licenses and government approvals required to do business in China—has been at or near the top of USCBC’s survey results for eight years, and it remains one of the most complex challenges to address. 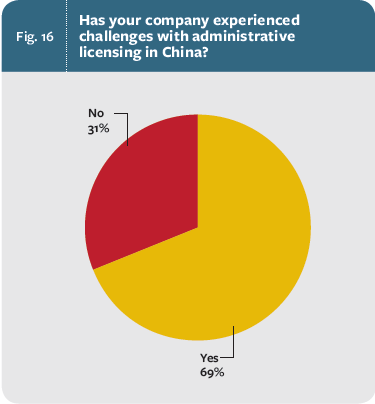 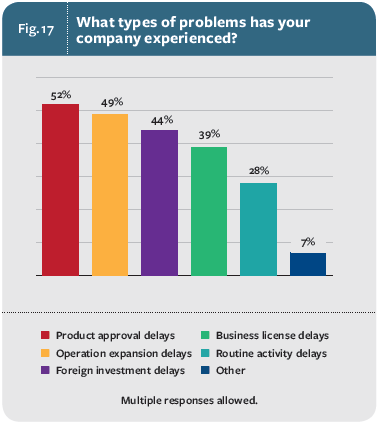 Almost 70 percent of respondents in this year’s survey indicated they had experienced challenges with licensing in China. The most frequent problems came in getting approval for products to be sold in the market, expanding operations, and securing approvals of foreign investments more generally (Fig. 16, 17). These problems are occurring not only at the central government level, but also at the provincial and municipal levels.

Recommendations discussed in detail in USCBC’s 2013 Board Priorities Statement to help address these issues include:

»» Ensuring equal treatment in licensing for all companies regardless of ownership;

»» Strengthening implementation of the Administrative Licensing Law; and 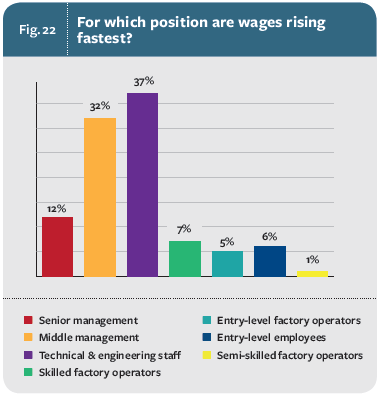 One way in which companies have usually sought to retain employees is by increasing wages and salaries. Survey data shows that companies appear to be adjusting their human resource strategies, however. In 2012, almost 30 percent of companies reported that they had increased wages between 10 to 15 percent in the past year.

This year, only 18 percent of companies reported wage increases of 10 to 15 percent. Respondents indicated the fastest increases in wages are for middle management and highly skilled technical workers, consistent with reporting in the 2012 survey (Fig. 22).

Despite these still significant year-on-year wage increases, most companies report that they plan to expand head count for their China operations in 2014 and that hiring more staff is the top vehicle through which the company plans to expand their resource commitment in China. Only 8 percent of companies predict that they will reduce their number of employees in China next year (Fig. 24). 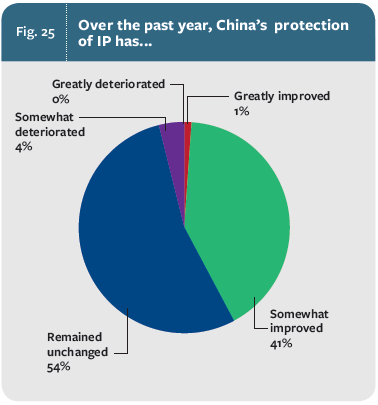 While the protection of intellectual property rights (IPR) has shown modest improvements in recent years, the vast majority of companies—98 percent—still say IPR enforcement is a concern for them.

A shifting IPR landscape and continued issues with enforcement have led a majority of respondents to state that IPR protection has gone unchanged” from a year ago (Fig. 25). Similar to last year’s survey, 41 percent said the IPR environment had “somewhat improved,” while only 4 percent cited deterioration.

The inadequate protection of IPR continues to have a tangible impact on companies’ willingness to expose technology in China through manufacturing, licensing, and research and development (R&D) activity. 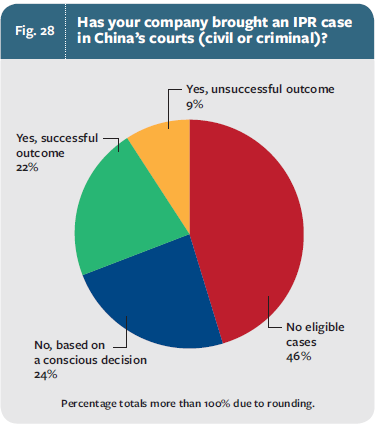 For IP enforcement more broadly, China’s courts continue to gain momentum as a viable channel for addressing problems, though not in all cases. More companies reported they have brought court cases in China, with increasingly successful outcomes: just over 20 percent of companies reported that they had brought a case with a successful outcome (Fig. 28).

This figure is higher for the third year in a row, suggesting that in some jurisdictions, China’s court system is improving in its protection of IPR, albeit slowly.

While there is no single fix to these problems, at a minimum China should adopt a tougher deterrent to IP theft, that is, the international standard of allowing criminal penalties (not just civil) in cases of IP theft on a commercial scale.

Uneven Enforcement or Implementation of Chinese Laws and Regulations

Challenges #6 and #7 are closely related and deal with how foreign and foreign-invested companies are treated in China versus their domestic competitors. In essence, respondents have indicated that rules and regulations are not applied consistently or equitably in China, and that their companies often are not treated the same as Chinese companies with regard to regulation and implementation.

As noted in the introduction to this report, companies report seeing signs of protectionism in a variety of areas, including licensing and regulatory approvals; tighter enforcement of rules against foreign companies; government pressure to buy goods and services from Chinese companies; and direct benefits such as direct subsidies, referential financing and better ability to sell products to the government (Fig. 29). 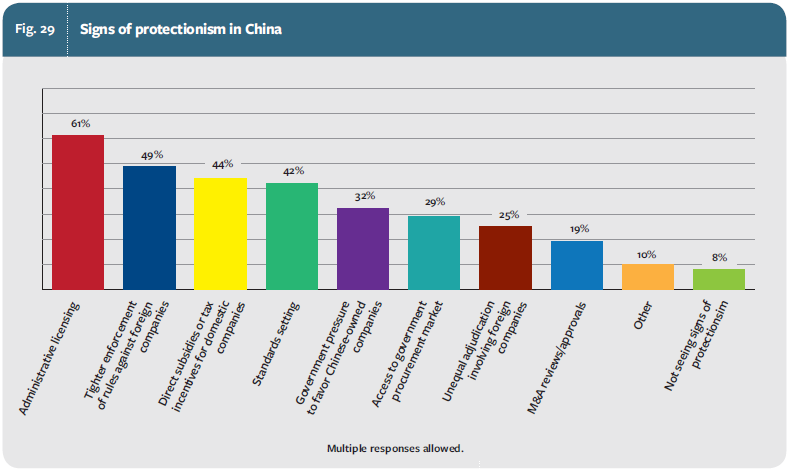 Transparency is a broad subject that ranges from the public release of draft laws and regulations for comment to fair and open government decision making. As such, it is a core element of a well-functioning licensing regime in that greater transparency increases understanding about the licensing process, reduces the potential for bureaucratic mismanagement and corruption, and speeds time to market for products and services.

China’s central government has made inconsistent improvements in rule-making transparency over the past several years. USCBC’s report on China’s transparency efforts goes into further details about the transparency records of the key ministries and agencies in China affecting business operations.

China should fully implement its commitment to publish all draft trade and economic-related laws, administrative regulations, and departmental rules for a full 30-day period, but it should also consider going further by posting draft regulations on a designated website for a 60- or 90-day public comment period. In addition, China’s central government should ensure that laws and regulations, once finalized, are consistently interpreted and implemented nationwide.

China’s standards and conformity assessment regime raises concerns for companies in a variety of sectors—as they set the ground-rules that dictate if and how companies and products can enter new markets. This year’s survey shows that companies remain concerned with a number of long-standing issues, such as China’s use of unique standards for goods and services sold in its market and the inability of conformity assessment service providers to test goods for China’s market. Both challenges significantly raise costs for American companies trying to sell to China while also limiting the access that Chinese consumers have to the fullest possible range of the latest products and services.

As noted in the 2013 USCBC Board Statement of Priorities, China should use global standards as the basis for Chinese standards wherever practical and adopt a fairer, more equal, and transparent market-led approach to standards setting and development.

Both the Chinese and US governments should seek to conclude a BIT incorporating these elements as quickly as possible.