USCBC will soon release its 2013 annual survey on China's business environment for American companies, including the top 10 challenges cited by USCBC member companies.

In spite of the higher pay, retention of qualified talent is still difficult. Turnover rates of 10 to 20 percent are not unusual.

Licenses or approvals are required for each aspect of doing business in China, governing everything from the specific products or services the company can provide, to the testing and approval of the product itself, to reviews of business transactions, including both greenfield investments and mergers and acquisitions. Some companies can secure licenses to operate across the entire country; other companies have to secure licenses city-by-city. Some approvals are granted at the municipal level; in other instances, companies must submit their documentation through a chain that stretches all the way to the State Council, China's cabinet.

In many cases, China's licensing and approval process slows investment and company expansion. For example, according to public sources one recent review of an acquisition took over seven months even though regulations stipulate it should take only four months. Companies note that:

Finally, licensing is the top area in which USCBC members say they experience protectionism, with nearly half of respondents saying they see protectionism in the way the administrative licensing process is managed. One company put it this way: "Favorable treatment of local firms in licensing applications, faster approval for local firms, restrictions placed on foreign companies." 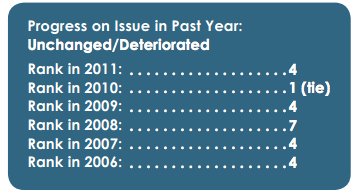 USCBC members continue to face stiff competition from Chinese companies, both state-owned and private. Most respondents (79 percent) report they compete with non-state Chinese companies; 67 percent also say they compete with Chinese state-owned enterprises [figure 13]. On the one hand, the competitive challenge that US companies face is similar to what they face anywhere: Competition is based on market determinants, such as product, service, quality, innovation, etc. On the other hand, survey responses suggest that both state-owned and privately owned Chinese companies may have preferential access from licensing approvals to government contracts to financing and other areas, giving them a competitive edge. Companies note that: 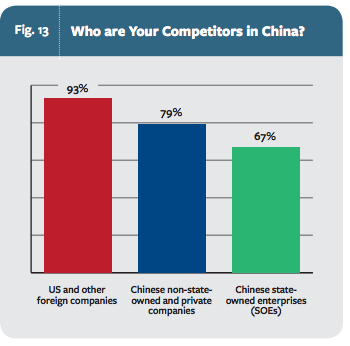 Companies reported across-the-board increases in labor, raw materials, land, and utility costs. As in past years, labor costs remains the greatest concern, and almost 60 percent of companies report that wages increased between 5 and 10 percent for 2012 [figures 14, 15]. These trends match those across the Chinese labor market, as companies have noted increases in minimum wages, province by province, over the last several years - and even sharper increases in salaries for skilled labor. The general outlook for inflation in China was also cited by 50 percent of respondents. As one company notes, "Inflation, salaries, cost of offices, cost of raw materials are making it difficult to consider China a low-cost region." 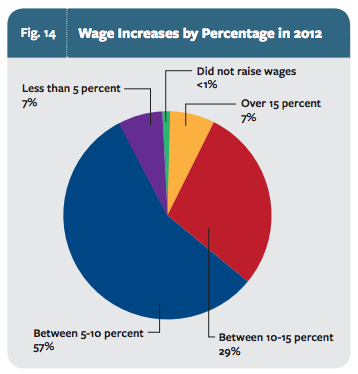 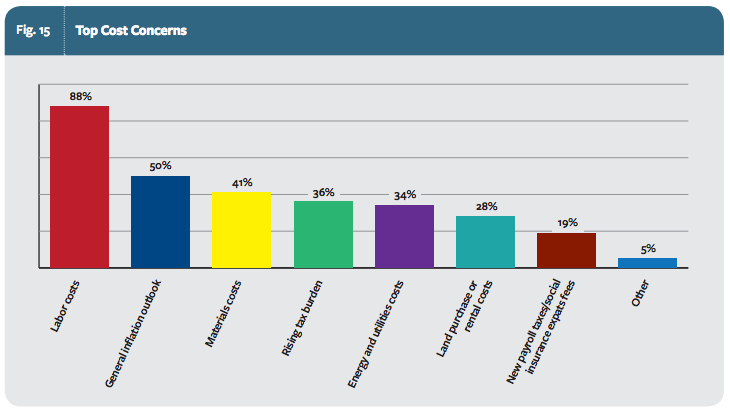 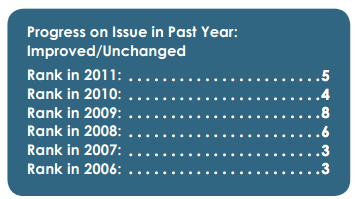 Companies continue to face challenges in enforcing their intellectual property rights (IPR) in China. Of those surveyed, 95 percent indicated they are either somewhat or very concerned about IPR enforcement. Despite that concern, over half indicated that they had seen some improvements in IPR protection in the past year. The continued difficulties have negatively affected company operations: The majority of companies report that IPR enforcement challenges limit the types of products they develop, make, or sell in China.

Companies report that the lack of a meaningful criminal deterrent is a significant roadblock to China developing a robust IP protection regime. USCBC has consistently called for the elimination of thresholds for an IP case of commercial scale to be considered under the criminal system. 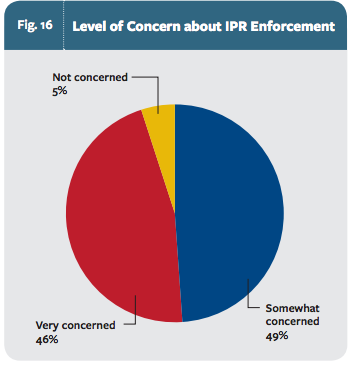 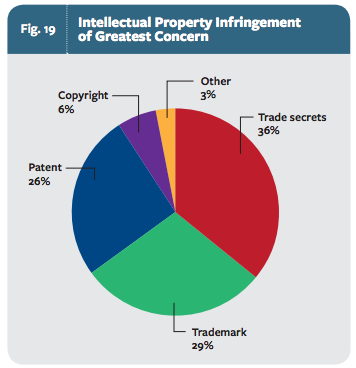 While China's laws and regulations are largely determined by the central government, implementation and enforcement is handled at the provincial and local levels. Frequently, different localities have different interpretations of rules, leading to patchy enforcement. In addition, companies have ongoing concerns that foreign companies face stricter enforcement than their domestic competitors. As a consequence, this issue returned to the top 10 for the first time since 2008. Companies report experiencing uneven enforcement in a wide variety of areas, such as tax audits, product quality testing, and workplace safety inspections. For example, American companies bring their global environmental health and safety standards to their China operations and comply with local laws and regulations, but frequently compete against domestic companies that do not, raising the costs for foreign companies versus their competitors.

Opportunities for foreign investment are uneven across business sectors, and China's most recent Catalogue Guiding Foreign Investment did little to address lingering concerns in this area. In fact, 17 percent of companies report that they reduced or stopped planned investment in China in the past year, with half of those companies reporting that they did so due to increasing market access restrictions in China [figures 9, 10].

Market access in services is a key component of these restrictions, particularly given the lack of progress in this area in China's latest foreign investment catalogue, despite public statements by the Chinese leadership on their intent to open this sector to further foreign investment. Companies reported the same concerns in the services sector that companies see across the board in China: difficulties in licensing; competition from Chinese companies; lack of equal treatment with domestic companies; and the direction of Chinese policies favoring domestic companies over foreign ones.

Chinese restrictions inhibit foreign investment in key sectors, such as agriculture, express delivery, financial services, and autos, preventing the full economic benefits of foreign investment from being realized. At the same time, such restrictions on foreign investment run counter to repeated calls from senior Chinese government officials to upgrade the quality of the country's industry and build a services-oriented economy. With full market access, foreign companies would be well positioned to help China achieve these goals.

Some examples the companies cited:

Competition with Other Foreign Companies

American companies not only encounter stronger competition from China's domestic companies, they also are competing against other foreign companies from the United States, Japan, Europe, and other countries for market share in China. The vast majority of US companies—93 percent—compete against foreign companies, and those who ranked the issue as one of their top challenges note that the competition is intensifying. Respondents said:

American companies operating abroad are required to comply with the US Foreign Corrupt Practices Act, the globe. Such provisions require US companies to carry out careful oversight of a variety of activities that support company operations in any country, including government relations, sales, and marketing activities. American companies reported that their competitors in China—both domestic and foreign—may be subject to less-rigorous laws in their home countries or may be skirting Chinese laws on corruption to gain market advantage.

Standards and conformity assessment provide critical ground rules for products entering the China market as companies determine how products are designed, manufactured, sold, used, and disposed of, and how they are certified in compliance with each of these steps. Most companies that participate in China's standards-setting process report that they have some difficulty in getting information on the process and are only occasionally included in setting standards [figure 20]. Companies said: 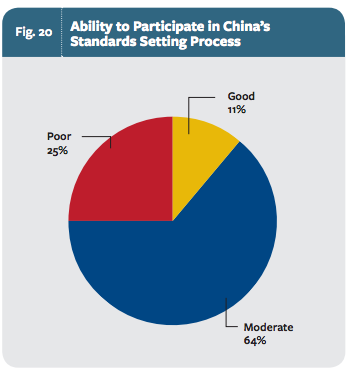 In addition, respondents range from CEOs of global corporations to executives based in the field. Survey results incorporate both strategic and tactical perspectives.

Cross-sector representation
USCBC members who completed this year's survey represent a cross-section of US companies doing business in China. Fifty-seven percent of respondents represent manufacturing companies, and 44 percent represent service providers—and many respondents' companies are active in both sectors. Nine percent work for companies in primary industries, such as agriculture and oil and gas [figure 22].

Respondents' companies represent small-, medium-, and large-sized enterprises, with the largest number of respondents (42 percent) having between 1,001 and 10,000 employees in China [figure 23].

Long experience in the China market
USCBC member companies have a long history of doing business in China: 53 percent of respondents' companies have been in China for more than 20 years, and 28 percent have been in China for 11-20 years. By the end of 2012, almost a quarter of respondents note that their company will have more than $1 billion invested in China, and 58 percent will have more than $100 million invested [figures 24, 25].

In China to access Chinese customers
As in past years, the vast majority of USCBC member companies report that they are doing business in China to access China's domestic market. Fourteen percent use China as an export platform to reach other markets around the world, though only 12 percent use their China operations to produce products that are shipped back to the United States [figure 26]. 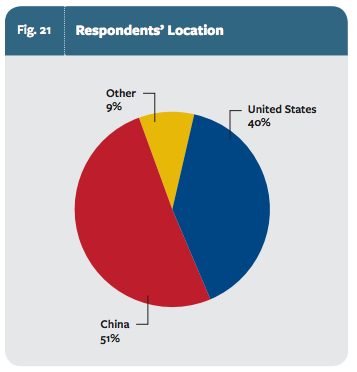 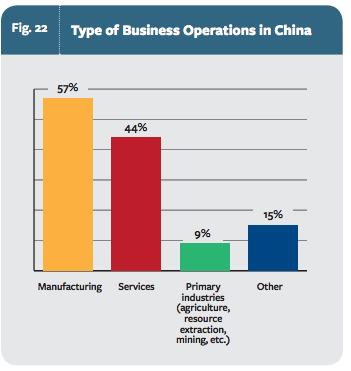 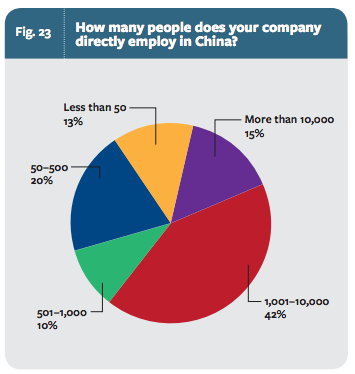 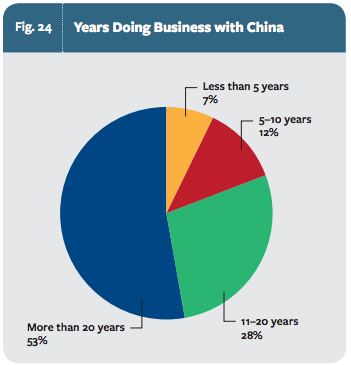 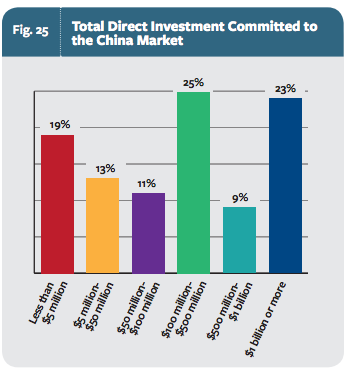 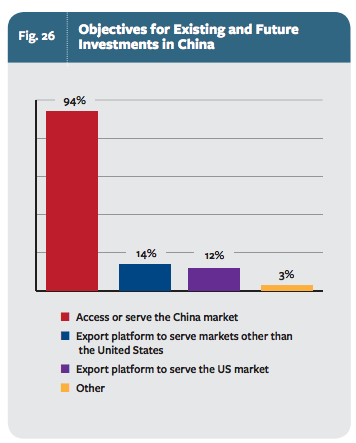