Invasive carp, also known as Asian carp, were brought to the United States by farmers in the 1970s to help keep aquaculture facilities clean of algae and snails. Some of them escaped during flooding and ended up in the Mississippi River. Long considered a nuisance for their manic breeding and ability to voraciously consume the food supply of indigenous species, they are routinely zapped by electric barriers installed across key waterway chokepoints to restrict them from migrating to more waterways across the country. In 2012 arrived Angie Yu to Kentucky from China via Los Angeles. Now she is trying to transform the image of the carp from invasive nuisance to export bonanza.

The unlikely turn of events began when Yu arrived in Los Angeles 31 years ago from the frigid city of Harbin in Heilongjiang province, with its eponymous river (Heilongjiang means “black dragon river” in Mandarin Chinese). Not a lot of job opportunities in those days for immigrants with limited English, so she started an import-export company. Her main line of business was textiles. In 2005 she started exporting crab shells, which are rich in glucosamine and keratin—both good for human joints. She purchased the shells and shipped them to China. Then Chinese businesses extracted the compounds, processed them, and shipped them back to the United States for sale to consumers.

“I figured there’s a market in China and I know how to market to it,” she said. “I thought it would be simple, but it wasn’t.”

“In 2005, I also started exporting lumpfish from Newfoundland, Canada, and Iceland to China,” she explained. Several years later, she read news about Asian carp, an invasive species in Illinois. She already had the market and customers, so she went to Illinois to buy the fish to export. She learned there were not enough fish processors in Illinois. “There were only two and they didn’t export.” Her first two containers weren’t processed well, so she started her own processing facility at the connection of two rivers at Wickliffe, Kentucky, and near Kentucky Lake and Barkley Lake, which are full of fish. Her first visit to Wickliffe was in 2012. By the end of the year, she signed an agreement to create a facility and Two Rivers Fisheries was born. In 2013, she moved to Kentucky, set up a processing room, and exported her first container. 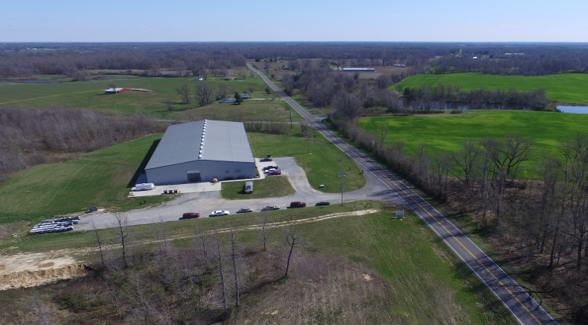 “I figured there’s a market in China and I know how to market to it,” she said. “I thought it would be simple, but it wasn’t.” Her first 10 containers to China that first year were challenging. “I lost money. The carp were frozen and too big. Local Chinese like smaller, fresh fish, and I wasn’t price competitive.”

More competitive are value-added products like ground fish meat that can be used to make dumplings and sausage. Soon, Two Rivers Fisheries will make dog treats out of the carp to sell in China. “Chinese people have lots of pets,” she said, relishing the idea of hundreds of millions of potential customers.

Facing the “valley of death” for startups

The challenges multiplied like carp. Her fish processing equipment imported from China was hit by the trade war with a 25 percent tariff. In 2020, two of her containers to China got tariffs waived, but the containers arrived in Dalian, China, one month delayed. Then Chinese port inspectors found a virus in shrimp imported from Ecuador by another company unrelated to hers, but her fish were held an additional five months anyway. By then, the expiration date was fast approaching, so she had to sell the meat for pet food. More money lost. After these issues and compounding problems related to COVID-19, she temporarily paused her exports to China.

She’ll soon start exporting again to China, but the challenges haven’t stopped. Another problem is fuel prices. She lives in the middle of the United States and competes with sea fish that are processed close to ports. Her freight costs are double those of sea fish processors, because she must truck her fish to the port, the closest being Savannah, Georgia, 800 miles distant. Once there, she faces hurdles. Before the pandemic, the shipping expense to one customer in Kenya was $8,000. After, it was $28,000.

And that’s not all. When she shipped her first container to China, she needed a health certificate from the US Department of Commerce for four species, but one was missing. Chinese customs officers held the container. Every year she pays about $20,000 to US federal government agencies for documents and inspections. “I’m helping them with a problem—the invasive species and providing jobs. They shouldn’t charge me. Every three months I have to pay them. I asked them to waive the fees. They cut the cost for the documents, but not the inspection fee. I talked to so many people, but then I gave up. That is why I am trying to do the value-added products instead.”

The local politicians couldn’t help with that problem, she said, but Senator Mitch McConnell’s office did. She didn’t know who Mitch McConnell was. But his staff members got the Department of Commerce to call her. Senator Ron Paul’s office also helped.

Local government has been helpful in other ways, with Ballard County creating an international industrial park. Yu set up in the first building in 2019. She helped bring in other companies, five of which are Chinese-owned. Then 2020 happened. She never thought the pandemic would last so long. Tenants of the industrial park have hung on, hoping for better days. 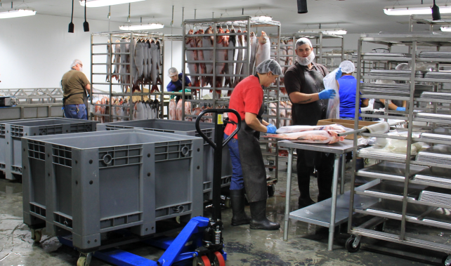 Better days may be here sooner than later. In 2019, she processed nearly 7 million pounds, up from less than 3 million pounds in 2017. Before the pandemic, 90 percent of her product went to overseas markets. That hurt her when pandemic-induced supply chain snarls hit. She said she learned her lesson that she was overexposed to international markets and needs to produce more for the US market. Recently she launched a new company called River Sun Group and began manufacturing fish balls, fish cake, dumplings, and eggrolls at a plant in Chicago. Her partners are US restaurant owners and restaurant association members. Next, she hopes to target big chain retail stores, but she’s not quite big enough to supply them yet.

The export part of the business, including the reset in China, continues to paddle forward.  For now, her biggest export destination is the Middle East. “China is supposed to be the biggest,” she said. “They really need the protein. Our carp has a very mild flavor, unlike in China where it can taste like dirt.” She explained that the flavor is a result of the aquaculture techniques in China where fish are raised in the same flooded fields used for crops.” Invasive carp also have another downside, which is that they sometimes hurl themselves out of the water hitting fishermen in the face with enough force to send them to the emergency room.

A Chinese-owned pork producer, one of the largest in the United States, recently told Yu they wanted 100,000 containers of ground meat. But she can’t meet that quantity yet. To do so may require more economic development help from government, additional lines of credit, and reservoirs of energy. “The government should support, financially or through incentives, processors on the Mississippi River. There is the demand but not enough production. Not enough fishermen. The government should help grow this industry and help market the fish rather than spending so much money hopelessly trying to control the fish.”

Before the pandemic, she was working with about 36 groups of fishermen with two to three to a group. She directly employees about 15 people in Kentucky, and more through her partnership in Chicago; however, she will soon be hiring more.

She has tried to talk to local and national officials about making some investments in this fledgling industry. She insists it will pay off by fully utilizing the fish and engaging in value added production. “That is why I’m doing ground meat to make egg rolls, fish balls, fertilizer, fish meal, everything. The Asian carp has no true stomach, so it eats all the time and grows three to four pounds a year.”

“Beginning in 2021, the Chinese government completely banned fishing in the Yangtze River and its tributaries for 10 years. More than 200,000 fishermen lost their jobs. Kentucky can fill that gap in protein and create jobs in the United States. This area is so poor. People need jobs.” 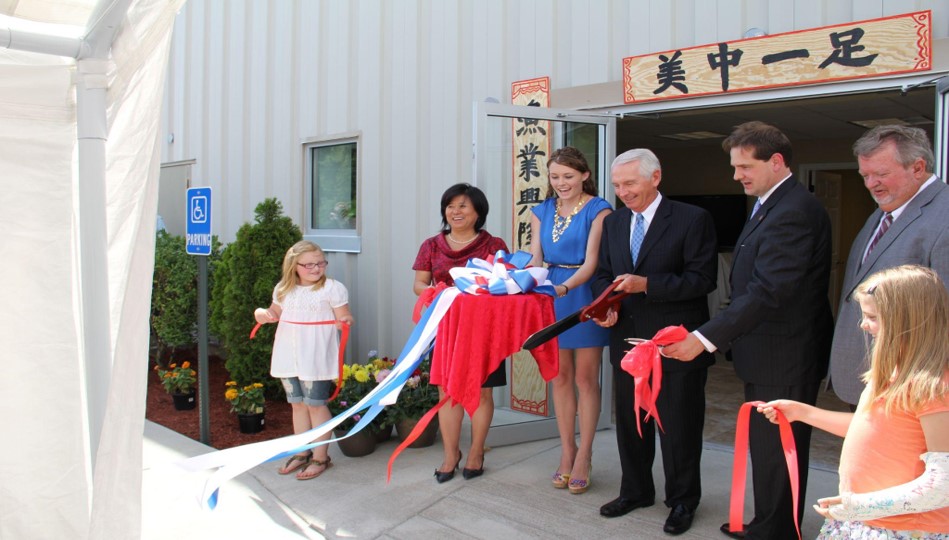 Her efforts have not gone unnoticed. Then-Governor Matt Bevin visited her facility, the Export-Import Bank of the United States highlighted her company as a success story on their website, and she was included in a PBS documentary. China Central Television also braved the leaping carp-in-the-face to tell her story and her mission to “Reduce, Reuse, Redefine Asian Carp.” It’s a tall order as she struggles to turn what she calls “trash into treasure.”

The treasure part is lagging. “I am very, very struggling right now. The banks won’t loan. The PPP loans really helped during the pandemic. I’m trying hard to get capital.” She has gotten approved for a working capital loan from a group supporting minority business owners. But being ethnically Chinese has been problematic for her, even though she is now a US citizen and her son an Iraq War veteran. “l feel some discrimination lately, but I don’t want to talk about it.” She grew up in China but has been in the United States for 31 years. “I don’t want the United States and China to fight.”

She said she’s not interested in politics, but she is involved in it anyway. “I’m a Chinese American and I want to help with the carp problem and raise the living standards of people in this part of Kentucky.”

“I am worried a lot about the US-China relationship. I hope there is no fight between them. But I am an ordinary person, a small potato. I am just trying to do my small business. For Chinese Americans, this is a very bad situation. If both big countries fight, both are hurt. With a trade war, both are hurt.”

Cover photo from US Fish and Wildlife Service under CC BY 2.0