Kurt Lammon’s dad bought a business so that he and his sons could remain close by working together. It worked. His dad purchased Polyvance, a maker of products for the auto repair industry. The year was 1995, and it was a hot one in Rainsville, Alabama. The family had no idea that years later they’d have a close relationship with China as a custom manufacturer and market for their products. Though the company mainly imports from China, it uses the items to create American jobs.

The beginning of the story was in the early 1970s when omnipresent chrome car bumpers gave way to plastic ones, in compliance with a national law to protect important parts of the automobile from crashes at speeds of five miles per hour. The law was not popular with car design aficionados who loved their land barges with audacious fins and miles of chrome, and who thought it was all downhill for cars made after 1974. One critic referred to plastic bumpers after that year as “big, ugly, and looking like they were slapped on by students in a junior high shop class.”

"Our jobs in most cases weren’t stolen. They wouldn’t exist, because the products were unaffordable. No sales, no businesses, no jobs."

Polyvance was created in 1981 by Jim Sparks, an auto body technician and insurance adjuster. That year, he invented the airless plastic welder to help auto body technicians repair the new plastic bumpers. Sparks that sparked Spark. It remains one of the company’s top sellers. Emboldened by the success of the welder, Sparks developed a range of other collision repair products.

Meanwhile, Lammon was studying mechanical engineering in Florida, and then worked in the aerospace industry there. He later got an MBA at Carnegie Mellon University. While interning in Japan, he focused on the “juggernaut of Japanese business” management, only to see their “bubble burst in early 1990s.” Never mind. There were still things to learn. Back then, China was still known for making poor quality products.

Kurt became president of Polyvance and his brother CFO. Their dad passed away in 2009. “Dad wasn’t involved in the management,” Lammon said. “He just wanted to bring together a project for his sons to stay close.” And they did.

In 2009, the company pioneered the nitrogen plastic welder. Fast forward, and one-third of body shops in the United States now has one. With 30,000 body shops nationwide, 10,000 have Polyvance’s welder.

In 2007, they started buying from China. The first item was a plastic welder heating element, basically a soldering iron that would go into their welders. “If it had been made in the United States, the part would have cost over a hundred dollars at retail prices, and no one would have bought our welders. We checked on Alibaba (the China-based e-commerce platform) and found a vendor in Xiamen.”

“I visited the vendors back then before wiring any money. I found them to be great people with a hard work ethic. They deliver on time and bend over backwards to help us out. That product is now viable to sell at a reasonable price point.”

But isn’t this the logic that thousands of US businesses used, which resulted in national cries of “China stole our jobs”? He said, “That’s faulty logic. Our jobs in most cases weren’t stolen. They wouldn’t exist, because the products were unaffordable. No sales, no businesses, no jobs. By getting these products made at an affordable price, even after figuring in the cost of shipping and now tariffs, the products sold. By selling them, we create jobs in this country.”

Creating jobs, not stealing them

Create jobs with imports? It sounds counterintuitive. “It’s not. We have 17 employees. If we couldn’t source affordable products from China, we’d have to lay off eight or nine. If those jobs were eliminated, so too would be the taxes those employees pay, and they would buy fewer things in their community, eliminating more jobs.”

His latest model nitrogen welder with a touch screen interface features components made in China. Collaboration with their Chinese vendors is very important. It couldn’t be made in the United States. They have thought about trying to make it in the United States, in India or Mexico, but there is no easy way to find the actual manufacturers. So, he keeps going back to China. “There is nothing else as convenient as Alibaba, and for small businesspeople, it’s a great tool.”

Tariffs for some items immediately doubled. Heating elements that cost $15 a piece pre-tariffs, ballooned to $20. Sales from 2016 either plateaued or decreased. The tariffs were responsible for a 10 percent decline.

The fact that imports from China create jobs in the United States and that the imported products can’t be made here at an affordable price, will come as a surprise to many policy makers in Washington, DC. It challenges the popular wisdom that trade with China is a zero-sum undertaking. Lammon is not waiting for the debate to be settled. He notes that his company's growth curve in United States is tapering off, as its products are now in over a third of US body shops. He thinks there is a lot of growth potential in Brazil, Colombia, Thailand, and other developing countries, because it’s cheaper for them to repair cars than buy new ones. “We are able to expand the company and become bigger and better by being able to sell around the world with China-made products. What could be wrong with that?”

The airless plastic welder sells for $300; the nitrogen welder $3,000. Lammon wants to develop a mid-market version with faster repair speeds than the airless welder at a lower price point than the nitrogen welder. But they can’t make it at a low enough price for developing markets without relying on China. “With the success of this and other products, I’m sure we can increase our sales and employment base perhaps by as much as three times.” 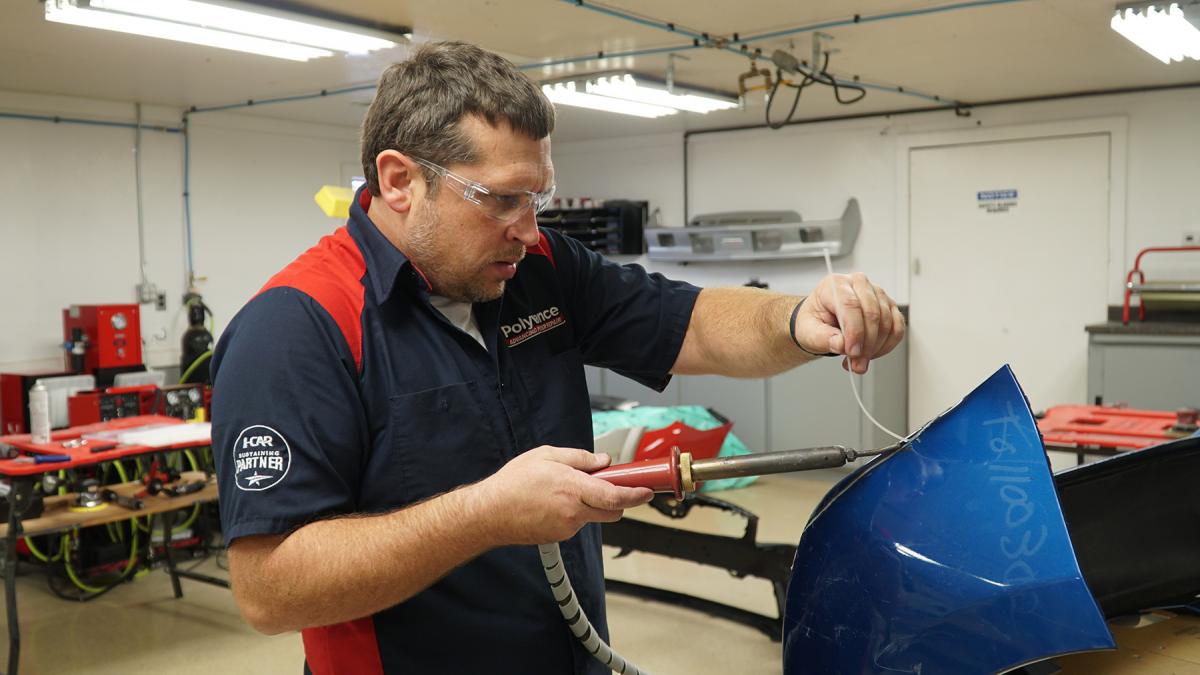 China is also a purchaser of the company’s products. “Our number two export customer is a Chinese company that buys the more expensive nitrogen welder. China is the biggest auto market in the world. I want to be in China. We will need to create a legal entity in China to repatriate profits and increase sales in China. There are a lot of unknowns at this point.” What is known is that manufacturing in China makes sense. “The lion’s share of the benefits from the production of each product goes into Polyvance’s coffers. The components’ cost is not more than about 20 percent of the product price, so the rest goes to Polyvance.”

Trump era tariffs on China imports have interfered with profits and sales. Tariffs for some items immediately doubled. Heating elements that cost $15 a piece pre-tariffs, ballooned to $20. Sales from 2016 either plateaued or decreased. The tariffs were responsible for a 10 percent decline.

COVID-19 supply chain problems also resulted in lost sales. “We have a good reputation, so when we weren’t able to deliver to customers, most of them just waited. Tens of thousands of dollars of lost sales and hours of lost time trying to navigate the supply chain issues. The lockdown in Shanghai resulted in us not shipping nitrogen welders for two months. Our purchasing manager has probably spent 25 percent of his time with crisis management and putting out fires.”

Despite the challenges of being a small business during a trade war between the world’s biggest economies, Lammon believes the overall logic of trade should prevail. “If our economies are intertwined, we are less likely to go to war. We don’t typically bomb people that we are trading with. Trade has pulled hundreds of millions of people out of poverty. I am really a libertarian at heart. Let’s get the bureaucrats and politicians out of the way and open things up.” He hopes a war over Taiwan can be avoided. “That is the biggest threat to our relations.”

Lammon loves being a micro multinational. He continues to apply lessons learned from his travels to make his business better. When he interned in Japan for a big phone company, he appreciated the open office plan common in the country. “The worker bees were lined up next to the section head. Everyone was at same level and communication was very open. When I came back to the United States, I tore down the walls at Polyvance. Now you can hear someone talking to a customer and know something they need to know, and you can help your colleagues provide better service.”

Another innovation is workplace training. The company is a world leader in training technicians to do plastic repair. They do YouTube videos, other virtual training, and in-person training. “The future is plastics”, as Dustin Hoffman’s character was advised in The Graduate in 1967. It still is today.

Is China in the future of the United States? Where Lammon lives “folks tend to be conservative and not cosmopolitan. They don’t see the benefits of doing business with these other countries”, he’s observed. “For Polyvance to grow, we have to go global. Other people might question that because they don’t understand. In the long run, it will be better for Polyvance, the local economy, and America in general.”

Rather than doubts, the state of Alabama gave the company an award for its exporting efforts.

Dad would be proud.