About the US-China Business Council

The US-China Business Council (USCBC) is a private, nonpartisan, nonprofit organization of over 280 American companies that do business with China. Founded in 1973, USCBC has provided unmatched information, advisory, advocacy, and program services to its members for over four decades. Through its offices in Washington, DC, Beijing, and Shanghai, USCBC is uniquely positioned to serve its members' interests in the United States and China.

USCBC's mission is to expand the US-China commercial relationship to the benefit of its membership and, more broadly, the US economy. It favors constructive, results-oriented engagement with China to eliminate trade and investment barriers and develop a rules-based commercial environment that is predictable and transparent. Among USCBC's members are many large and well-known US corporations, though smaller companies and professional services firms make up a substantial portion of the overall membership.

In early 2021, the USCBC launched a US subnational initiative dedicated to growing support for trade with China at the state and local levels. By publishing company stories and holding events with local partners, the initiative seeks to highlight the tangible benefits of US-China trade and the impacts of US government policies like tariffs on small- and medium-sized enterprises and local communities. 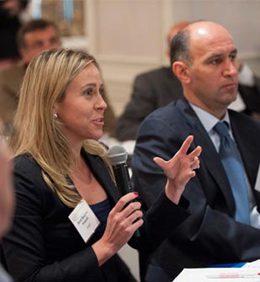 The US-China Business Council (USCBC) is a private, nonpartisan, nonprofit organization of roughly 270 American companies that do business with China.

Getting Started with USCBC

Has your company recently joined USCBC and you're not sure what you need to do to make the most of your membership? Start with this quick guide!

USCBC is governed by a board of directors composed of distinguished corporate leaders. The current chair is Marc N. Casper, Chairman, President, and CEO of Thermo Fisher Scientific Inc.

USCBC offers career opportunities at various levels, from undergraduate and graduate internships to full-time managerial positions in our Washington, DC or China offices.