On this page, you can find the full text of our 2021 State Export Report, an interactive map to find data from your home state, and a link to the full report PDF!

In 2020, the global economy underwent significant shifts, and the US-China commercial relationship was no exception. Early in the year, the United States and China signed and implemented the Phase One trade agreement and halted tariff escalations for the first time in two years. Last year saw a healthy recovery of goods exports to China, though services exports—the data for which lag a year behind—have fallen for the first time since 2003. Combined exports of goods and services to China still supported nearly 1 million US jobs in 2019, the most recent year for which data are available. 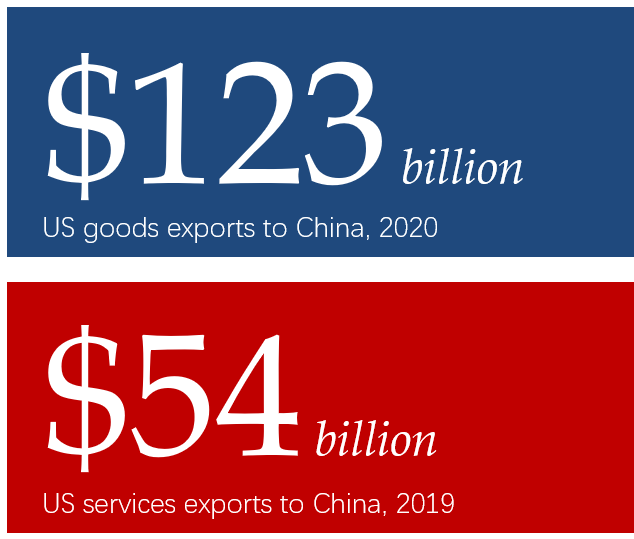 This year’s edition of the US-China Business Council State Export Report draws on data obtained from The Trade Partnership, an economic research firm. The report provides a breakdown of each US state’s goods and services exports to China, and the national export totals include the export data for each state. Goods export figures are primarily based on data from the US Census Bureau, the US Department of Agriculture, and Moody’s Analytics. Goods export figures are classified according to the US government’s North American Industry Classification System. Services export figures are primarily based on data from the US Bureau of Economic Analysis (BEA) and Moody’s Analytics. Services export figures are classified according to BEA categories. This year’s edition of the State Export Report uses the same sector categories for goods and services as last year’s. Goods exports cover 2011–2020; services exports cover 2010–2019, the most recent year for which detailed data are available from BEA. Because historical data from each of these sources are revised annually, this edition of the State Export Report replaces all prior editions. As in previous editions, this report uses a methodology that credits agricultural exports to states in which crops are grown as opposed to states with large ports where bulk commodities are aggregated prior to export. Average annual growth is calculated with an average annual growth rate formula. A detailed explanation of the methodology for jobs, goods, and services exports estimates is available on The Trade Partnership’s website. 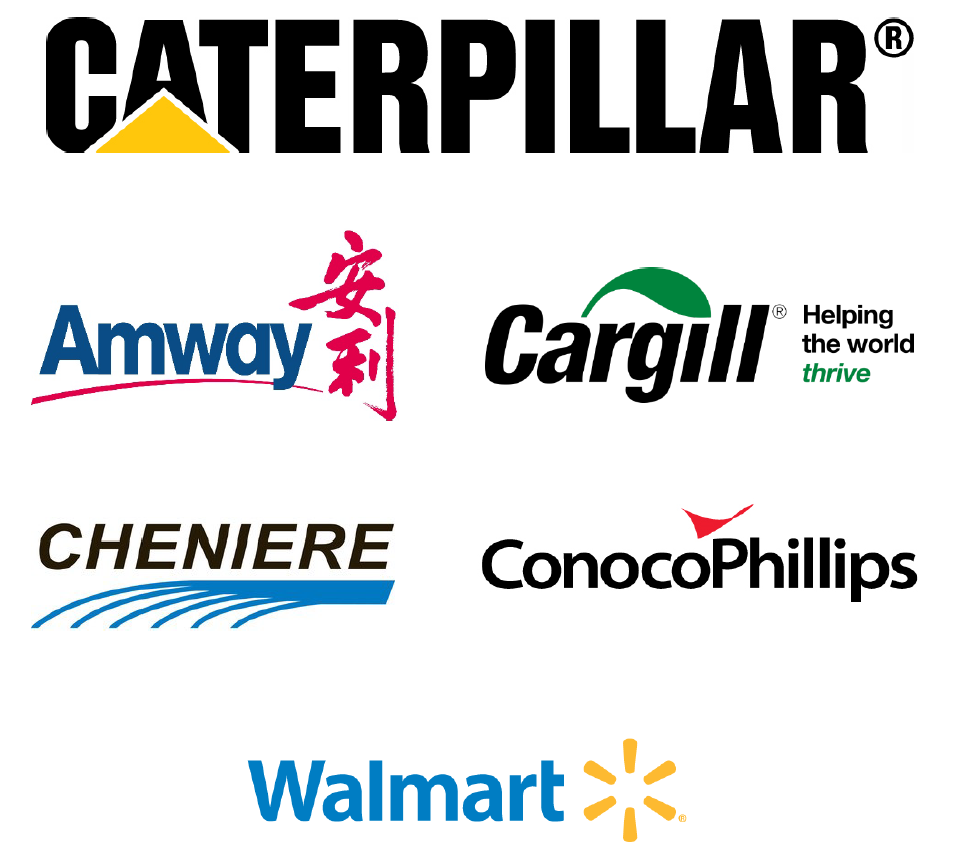 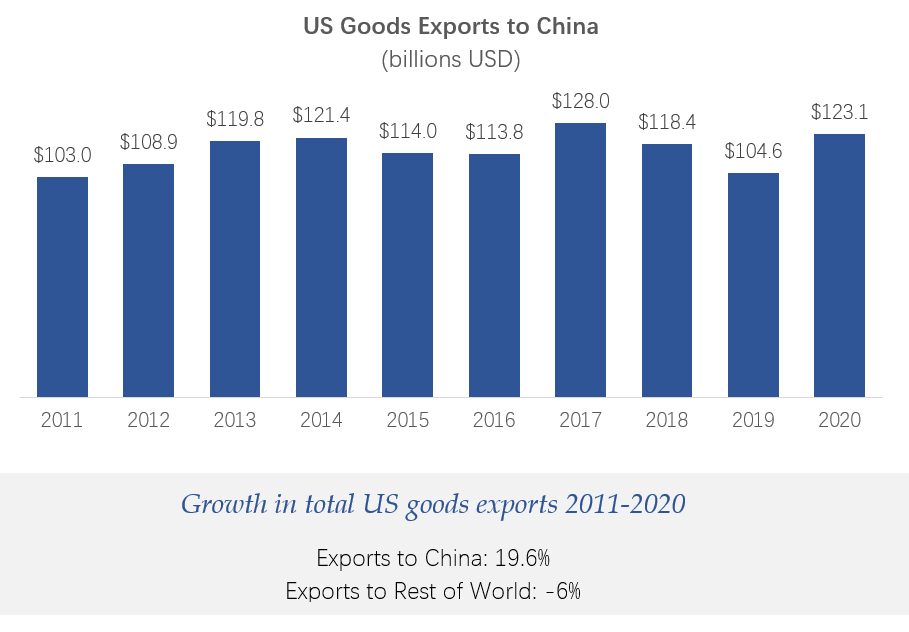 In 2019, the United States exported just under $105 billion in goods to China. Last year, that number jumped 18 percent to $123 billion, the second-highest amount in a decade. Oilseeds and grains, oil and gas, and semiconductors and their componentry were all major drivers of growth. In Texas alone, exports of oil and gas to China jumped by $4 billion. Illinois, Iowa, and Kansas all saw their exports of oilseeds and grains to China increase by around $1 billion. And in Oregon, companies sent nearly $2 billion more worth of semiconductors and parts to China than the year before.

Exports to China increased by 18 percent in 2020, while exports to the rest of the world fell by 15 percent. The disparity in exports is the result of China’s early recovery from the pandemic-induced economic slowdown. 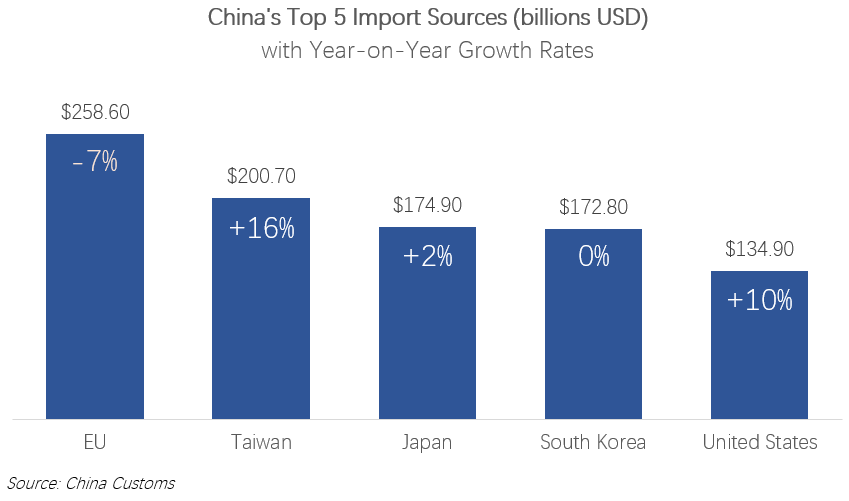 Note: Data for this chart are based on PRC government statistics. The value of PRC imports from the United States may differ from US exports to China due to discrepancies between US and PRC trade statistics, methodological differences regarding shipping costs, and tariffs that were applied as goods passed through other customs territories on their way to China. 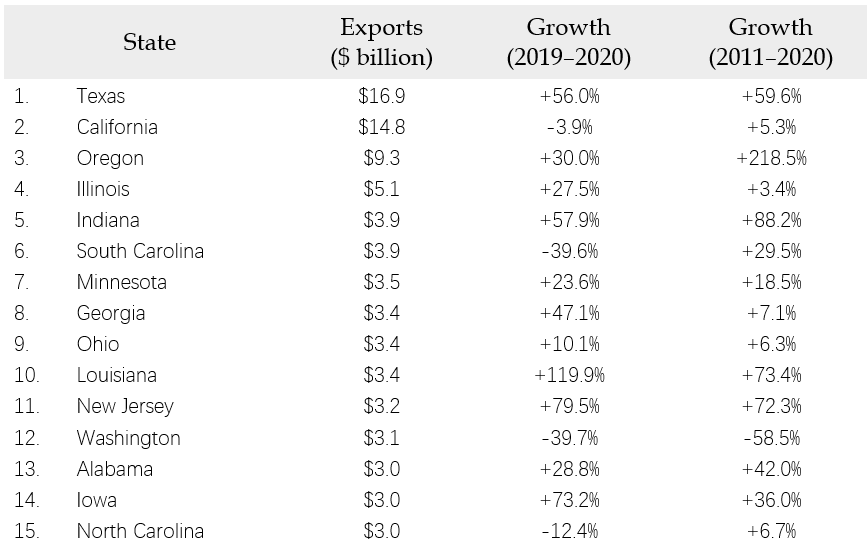 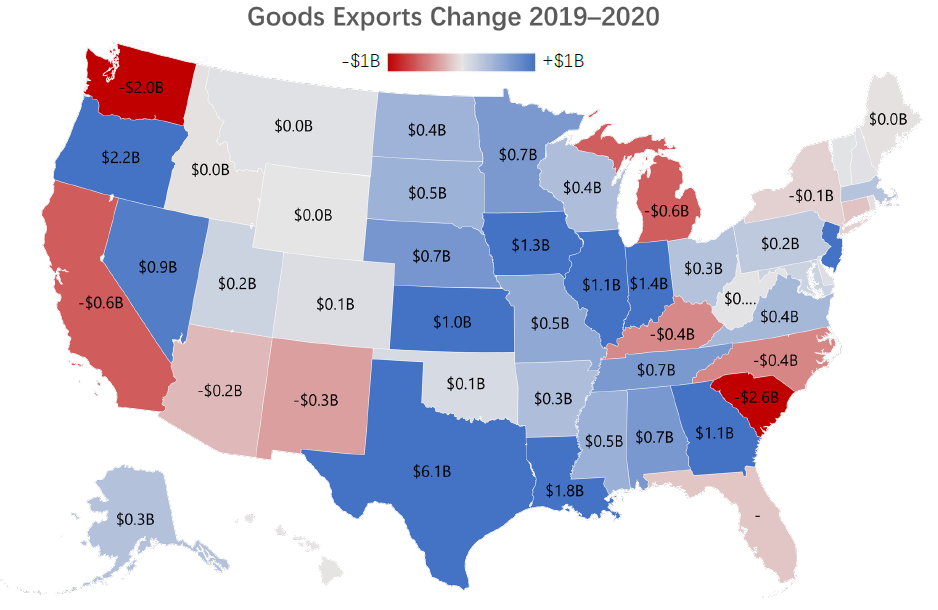 Of the 35 states that exported more to China in 2020 than the year prior, nine saw exports increase by more than $1 billion and another 19 saw goods exports increase by more than $100 million. China was the top goods export market for four states—Alaska, Alabama, South Dakota, and Oregon—in 2020, up from only two in 2019. China was also among the top five markets for 45 states. That said, some states’ goods exports to China decreased in 2020, and in some cases, the decrease was significant. Whether a state increased or decreased its goods exports to China largely depended on whether its leading industries aligned with China’s tariff exclusion categories and Phase One purchase commitments.

US states exported over $18 billion more in goods to China in 2020 than in 2019, and Texas alone accounted for a third of that increase. The significant jump in Texas’s exports to China was powered by oil and gas exports—the state shipped around $6.3 billion in oil and gas products, nearly $4 billion more than the year before. This jump in fossil fuel sales also helped stimulate an export jump in neighboring Louisiana, where oil and gas exports rose by $1.7 billion. These sales were driven in part by significantly higher purchases by Chinese state-owned firms aiming to fulfill purchase commitments under the Phase One trade deal.

Semiconductors are increasingly becoming a focal point of strategic competition between the United States and China, with both countries pursuing policies to ensure access to the chips that are critical to so much of the global economy. Semiconductor exports surged in 2020, particularly from Oregon, where total export growth was powered by a $1.8 billion increase in semiconductor and componentry exports. Texas and California also saw sizable increases. While these exports support American industry and employment, the surge was likely due to Chinese companies stockpiling chips in response to and in preparation for restrictive US policies that threaten to cut off their access.

A recovery in oilseeds, grains, and meat exports helped farmers in agriculture-dominant states

Last year saw growth in oilseeds and grains exports to China from agriculture-exporting states, such as Illinois, Iowa, Kansas, Minnesota, and Nebraska. The top 10 exporters of oilseeds and grains all saw their exports to China roughly double last year. Exports of processed poultry and pork also helped agricultural states, with meat product exports to China increasing by $2 billion nationwide in 2020. China's Phase One commitments to purchase agricultural products, combined with lowering its restrictions on imports of certain grains and meat products from the United States, helped US agricultural exports exceed the levels they stood at before the trade war.

Exports from Washington to China continued to fall last year, driven by the sustained decline of exports of aircraft and parts. In 2020, these exports fell by $1.7 billion to $1.1 billion. This represents a huge decrease from 2017, when the state exported more than $11 billion worth of these goods. Likewise, in South Carolina, a collapse of aircraft exports to China—from around $3 billion in 2019 to about $3 million in 2020—rippled throughout the state. At least some of these declines can be attributed to withered demand for aircraft resulting from the collapse of international travel due to COVID-19.

Note: Full-year services export data are available only through year-end 2019. 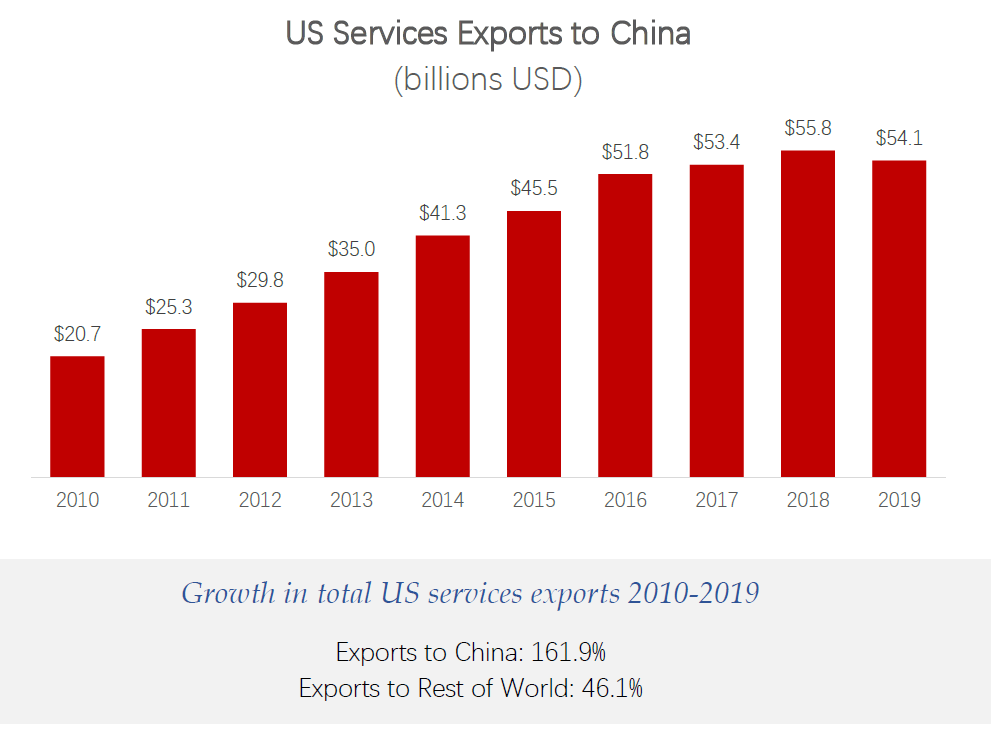 US services exports to China contracted in 2019, the first time in more than a decade 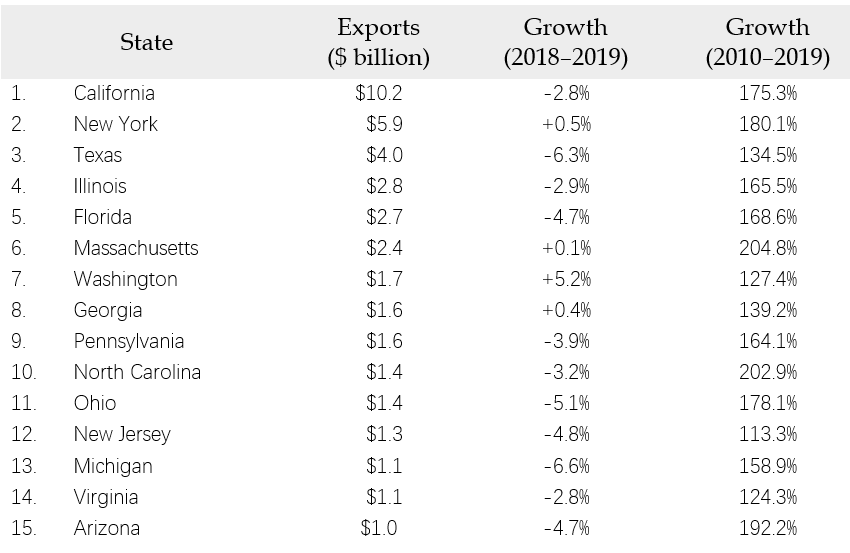 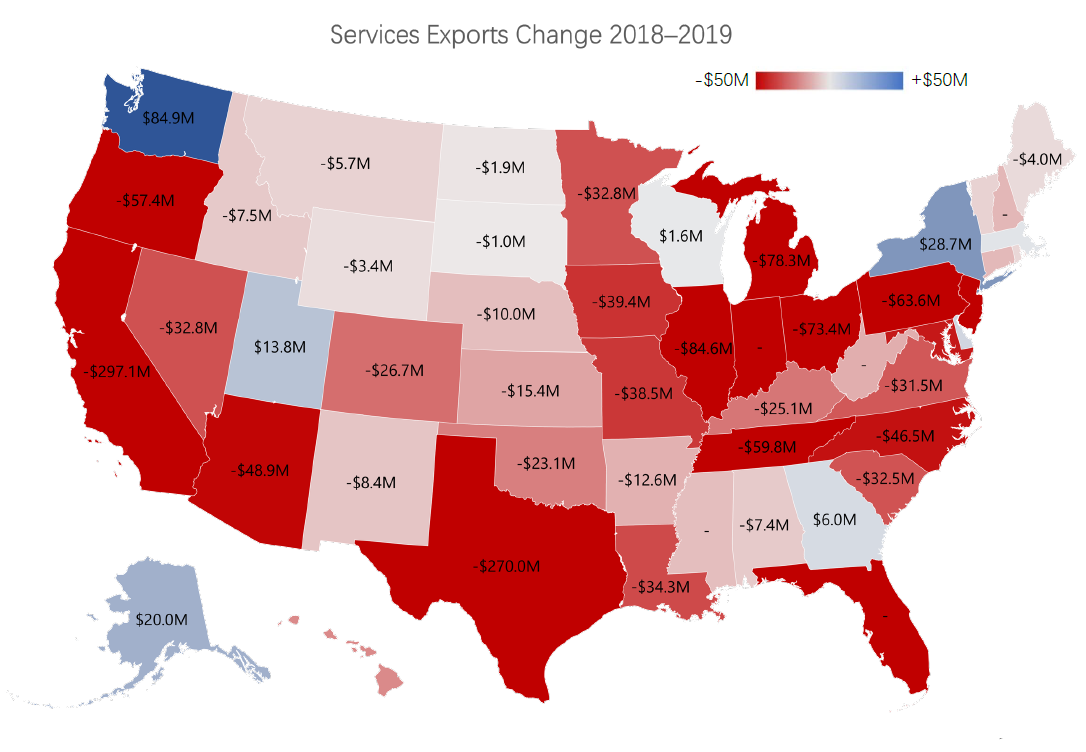 Digging into the numbers

Viewed from the perspective of the last 10 years, services export growth to China has been strong—all but four states have experienced triple-digit growth since 2010. That said, most states saw year-on-year declines in services exports in 2019. The number of states exporting more than $1 billion in services to China fell to 14, down one from 2018. While China remains a top-five services market for 44 states, it is the top market for only four states, down from 15 back in 2017. As with goods exports, fluctuations in specific industries can cause sizable changes in a state’s total services exports.

Travel consistently represents the top US services export to China. US travel exports account for all the money spent by Chinese visitors in the United States. Several categories fall under the travel umbrella, including business travel, health travel, personal travel, and education travel, which is covered further below. In 2019, business travel fell by around 10 percent to $3.6 billion and personal travel declined by a little over 8 percent to $9.4 billion, possibly due to visa slowdowns and general wariness of traveling to the United States amid bilateral tensions. The 2019 data do not include the COVID-19 pandemic’s effects on the travel industry, and it is highly likely that the 2020 data will show that travel exports from US states declined even further that year. One bright spot is health travel exports, which increased by $27 million in 2019.

Visiting Chinese students are a significant boost to university revenues across the United States. For three states—California, New York, and Massachusetts—these students represent over $1 billion in tuition, fees, and local spending. In 2019, exports of education-related travel fell by about 3 percent, or $422 million, negatively impacting school budgets across the United States. This tracks with a general decline in international students enrolling at US universities in the 2018–2019 academic year, but it could also be related to increased scrutiny of Chinese students and visa restrictions.

Exports to China constitute more than cars or computer parts on container ships bound across the ocean—they also represent the livelihoods of thousands of Americans in industries from agriculture to high-tech manufacturing. Estimates of jobs supported by exports to China take both goods and services exports into account; as a result, the most recent job estimates are from 2019. That year, US goods exports to China had fallen for the second year in a row as the United States and China leveled steep tariffs against each other and services exports plateaued. In turn, the number of jobs supported by exports to China fell to 916,000, down from 1.1 million in 2017.

Job losses tended to be tied to fluctuations in specific industry sectors. Take Texas, for example, where the number of jobs supported by exports to China fell by nearly 20,000. In 2019, Texas’s goods exports, predominantly driven by oil and gas sales, fell from over $16 billion to just under $11 billion. Tariffs on US petroleum products and their impacts on energy prices helped depress the state’s exports to China and the jobs that they supported.

In Washington, the situation turned even more grim in 2019. While Washington’s exports of motor vehicles and software royalties to China had a strong year, it was not enough to make up for an $8.7 billion decline in the export of aerospace products and parts to China, which fell by roughly 76 percent from the previous year. Overall, Washington’s exports to China fell by $9 million in 2019, and jobs that had been supported by those exports fell by 38,000.

Not all the news in 2019 was negative

An increase in exports of oilseeds and grains in 2019 helped boost jobs supported by exports to China in the US heartland, where agricultural exports are a key pillar of the local economy. Illinois, Iowa, Minnesota, Nebraska, and the Dakotas saw exports of oilseeds and grains more than double in 2019 as China made goodwill purchases during trade negotiations. In 2019, these states all saw the number of jobs supported by those exports grow by more than 2,000 each, with Iowa adding around 6,000. Further west, Oregon continued its rapid growth of exports in semiconductors and parts, more than doubling the value of exports in 2019. Along with that expansion of exports came an additional 8,659 jobs across the state. 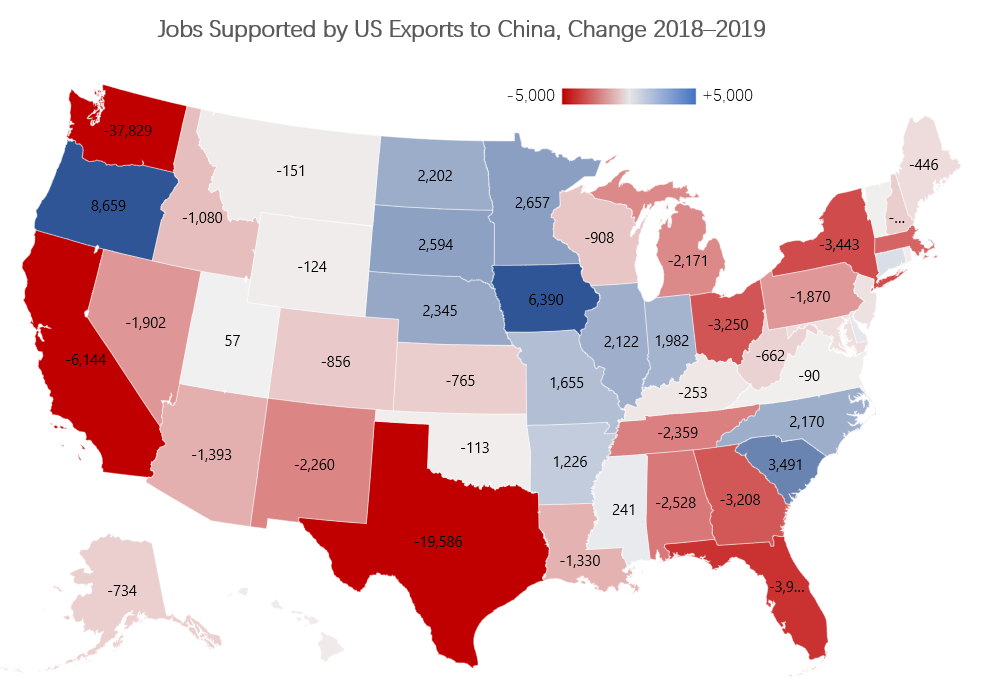 Here, you can find data from your state. State reports can be accessed by clicking on your state. Each individual state report includes information about the top goods exports, top services exports, how they have grown, and what markets they go to.

Prefer a PDF of the report? Download it below: