Food Safety in China: What US Companies are Bringing to the Table 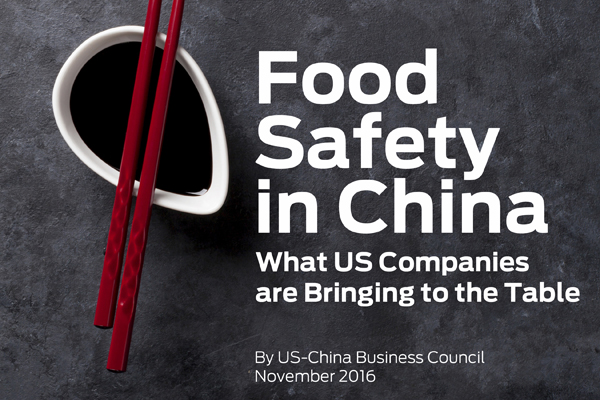 Food Safety in China: What US Companies are Bringing to the Table

November 2016
“Food is the most important issue under the sky,” according to an ancient Chinese proverb.

As Chinese consumers gain greater spending power, their preferences and concerns are exerting greater influence on the market. Food safety has become a particular focus for Chinese consumers, and several recent high-profile food safety investigations have heightened public awareness and concerns on this front. In Pew’s most recent survey of public concerns in China, 32 percent of survey respondents indicated that food safety is a “big problem”. It also ranked among the top ten concerns of the Chinese public in Pew’s 2012 and 2013 reports.   Food safety was a higher ranked public concern than environmental pollution, the legal environment, and general well-being in a March 2016 report by CCTV, and in the four most recent surveys conducted by Xiaokang Magazine and Tsinghai University, it also topped the list of concerning public issues.

Chinese regulators have responded to these concerns with urgency and conviction, making food safety a policy priority. The most comprehensive and well-known example of recent regulatory action to improve China’s food safety environment is the revised Food Safety Law. The law took effect in October 2015 and instituted stricter standards and harsher penalties for noncompliance, making great strides toward creating a food safety system with shared responsibility across the supply chain.

Despite the increase in regulatory attention, ensuring food safety remains a continual challenge in China’s food industry. From farm to table, from seed to storage, and from the production line to the test lab, companies are now charged with guaranteeing that food is safely produced, processed, and delivered to the public. But vague language in policy directives and a lack of interagency coordination are sources of confusion about what is expected of different stakeholders. The prevalence of small players creates a diverse, disjointed agricultural supply chain that is difficult to oversee—creating compliance concerns for multinational companies in the food and beverage space who deal with these companies in their supply chains. Although regulators have taken concrete steps to promote and enforce shared responsibility across the supply chain to keep food safe, it is not yet a broadly entrenched value in China. Inflated complaints by professional consumers—individuals incentivized by financial gain to report food safety violations—are a step toward a more transparent system, but distract from tackling core food safety reforms.

Robust transparency in policy creation and implementation—paired with even enforcement—is critical for companies to efficiently operate in any market. A transparent, healthy regulatory approach leads to policies that are balanced, implementable, and effectively achieve food safety outcomes that help create a greater supply of safe food.

In 2016, USCBC conducted more than 40 interviews in China and the United States with its member companies, Chinese and US government officials, and other stakeholders in China’s food industry about approaches to mitigating food safety risks, best practices for engaging with the public and private sectors, and the surrounding policy and regulatory environment. The interviews included professionals in farming, processing, packaging, retail, food service, and ecommerce industries.

Through this research, USCBC found that US companies are responding to food safety challenges in China in ways that are collaborative and innovative, and help promote food security across the whole supply chain.