China is Michigan’s third largest export market, generating $2.8 billion in 2020. Like other states, the range of companies selling things to the world’s second largest economy—and likely to be first in the coming years—is deep and diverse, including building materials, sour cherries, testing equipment for passenger airplane brakes, and much else.

State leaders point to the 26,000 jobs supported by China exports as evidence of the important contribution to Michigan’s economy. Given the benefits of trade, which have grown steadily over the last decade, they have a vested interest in the federal government getting trade policy right, especially if Chinese buyers are to continue purchasing leading export products such as passenger vehicles, car parts, agricultural goods, and machinery.

Michigan services also do well among free-spending Chinese consumers who paid college tuitions and travelled to the state to the tune of more than $700 million in 2019.  Exports of goods and services dipped in 2020 with a further drop expected in 2021. But exporters remain optimistic that growth will resume, especially if the US government gets trade and China policies right. 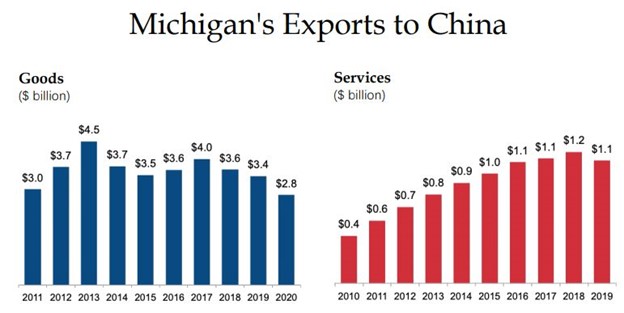 Like many other states, the Michigan governor’s office is deeply involved in promoting business opportunities in other countries and wooing investment capital to the state. This work has gone on for years, staffed by an assortment of economic development and country market specialists. Governors often take a hands-on role, leading trade missions of Michigan companies and welcoming investor delegations from abroad. Other resources are leveraged, including state universities and their international business departments, as well as federal government expertise like the local Export Assistance Centers of the Department of Commerce.

Despite these efforts, demand for services has slowed during the past two years, due in part to bilateral tensions and trade disputes, said Alyssa Tracey, director of international trade, Michigan Economic Development Corporation (MEDC). What’s more, trade missions and shows came to a halt during the onset of the pandemic and China may not open to these events until 2022 or later. “Demand for our services has shifted with a notable increase in interest in the Canadian market, but our team continues to support Michigan exporters who want to enter or expand in China through our Michigan-China Innovation Center.”

Similar challenges are faced attracting China investment to Michigan. “We’ve been in China for many years,” said Brian Connors of the of the Michigan-China Innovation Center, a non-profit delivering trade and investment programs and funded by a grant from MEDC. Connors also noted that state government interest ebbs and flows depending on the focus of governors and what challenges the economy faces.

“There are atmosphere problems currently. But the Chinese are still committed. Their Chinese customers want them to be here.”

“Some Chinese companies want to come here but have trouble getting visas,” he said. “There are atmosphere problems currently. But the Chinese are still committed. Their Chinese customers want them to be here.”

Connors acknowledges that some Chinese firms have scaled back their Michigan operations. “It’s hard for them, the sensitivity about tech and the costs of doing business here.” He thinks China has underinvested in the US compared to companies from Japan and the EU. “Investing here is a long process with a significant learning curve for the Chinese,” he said.

There’s also a significant learning curve for Michigan businesses selling to the China market, but many companies have mastered it and done well—until the trade war erupted a couple of years ago, first with tit-for-tat tariff increases of 25 percent, then with additional sanctions and counter sanctions with no end in sight.

“In 2016, 80 percent of our production went to China; today, it’s down to 10 percent,” laments Rob Kukowski of Kamps Hardwoods, a company that owns a sawmill and kiln, operating in one form or another for the last 100 years. Kamps began exporting to China in 2010, cashing in on an almost insatiable demand that sucked up more US hardwood exports than the rest of the world combined.

In 2019, 25 percent tariffs hit, and Chinese purchases from US producers dropped by business by half. “Many in the industry went bankrupt,” Kukowski said. “We had layoffs but managed to keep doors open. Prices fell by 40 percent. Few people knew what a disaster it was, as most of the attention went to the farming sector in the Midwest. We got no bailouts. What was a $4 billion in revenue industry in 2018 became a $2.5 billion industry in 2020.”

He said that China started buying more US hardwood when it looked like Biden would win. That calculation may be revisited, as the Biden administration shows no signs of abandoning Trump-era tariffs without receiving so far unspecified China concessions.

Faced with a near death experience and the loss of a supply chain that took 25 years to build, Kamps is relieved to see that prices for hardwood have rebounded and demand is up globally. Even so, US industry fears that their share in China will shrink further as buyers look to suppliers in other countries deemed friendlier and more reliable. “Our efforts to shrink the US trade deficit with China have come to naught.”

Kamps has joined other Michigan companies talking to elected officials and anyone else who will listen to their message of lifting tariffs and creating trade policy that protects the business relationship with China. “At the federal level, officials have been tone deaf,” he lamented. “We have industry associations working on Capitol Hill but messages that tariffs and trade tensions are bad seem to fall on deaf ears.”

Kukowski said there are other unaccounted costs of the bad bilateral relationship. One is that China will likely buy hardwood from countries that do not have sustainable forests, contributing to global climate change. “Our forests are in good shape and will be for many years to come.”

Kukowski gives high marks to the state’s economic development program that helps smaller Michigan companies enter the China market by providing business matchmaking and through grants from a federal program that awards matching grants for travel to trade shows.

Another Michigan-based organization to sour on the trade war is the Cherry Central Co-Op, buying and processing fruit from small farmers in the state and across the United States and Canada. Although the Chinese prefer the sweeter variety, the Cherry Central’s sour cherries have found a niche, which could amount to $5 million in the next few years. Not a huge sum compared the value of other state exports, but important to hundreds of small farmers who have come to depend on foreign markets. The trees are old and not easily switched out for other crops. 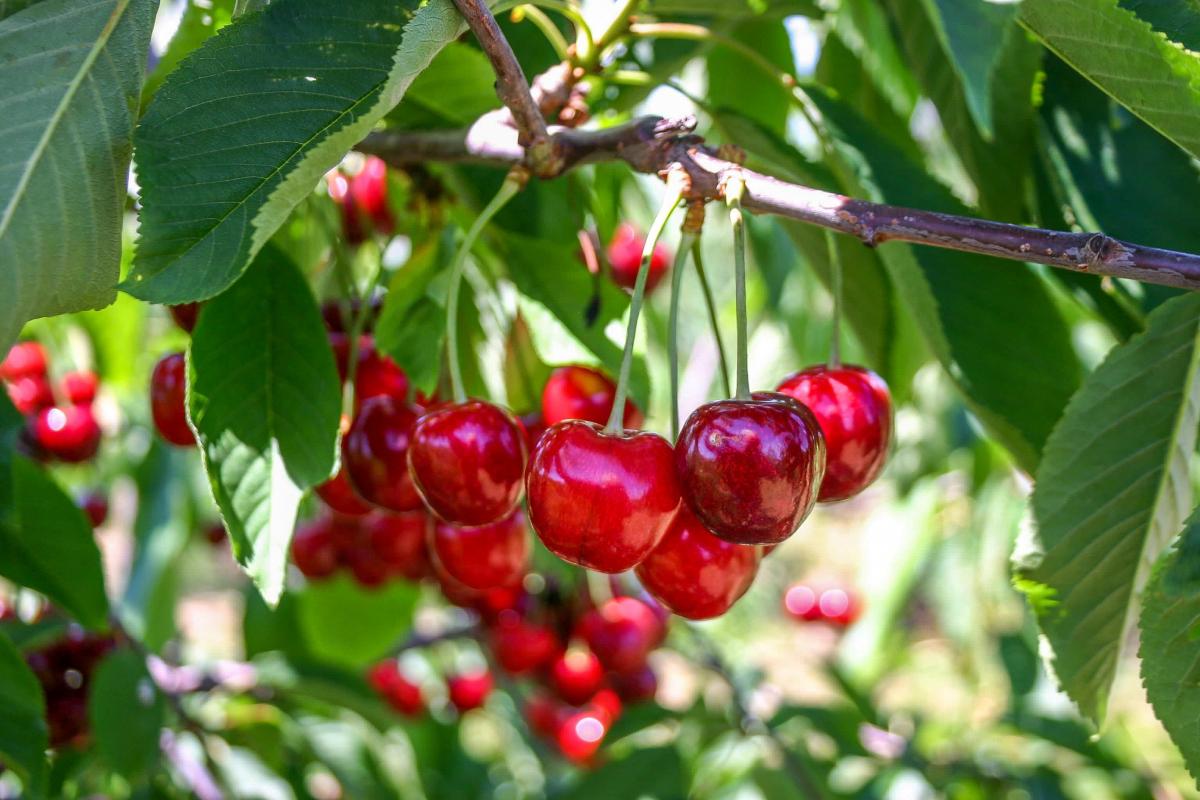 China has purchased cherries from the Cherry Central’s 12 factories for many years including products such as freeze dried, puree, juices, and concentrate. “Things really picked up in 2017,” said Mark Becker, head of international supply. “Since the trade war began, sales are down, and tariffs are up—as high as 45 percent.” He says producers in Poland and Turkey have moved into the China market with lower labor and tariff costs. He worries that even though the US-grown label has a positive reception among Chinese consumers, that could change as many things associated with the United States become unpalatable because of negative publicity in the Chinese media and rising nationalism.

While the political drama plays out in Washington and Beijing, Cherry Central is focused on marketing the health properties of sour cherries and providing more fresh products. Frosty bilateral relations are not the only challenge. Shipping containers are in short supply and freighters languish in China’s ports, as COVID-19-related disruptions have snarled sailing schedules. Orders placed last December are still enroute to end users six months later.

Undeterred, Cherry Central, now employing about 1000 workers in the United States, is experimenting with cherry juices, maybe adding some pineapple to increase sweetness which Chinese consumers like. Cherry Central has developed “flavor profiles,” one for the north of the country and one for the south. “We are thinking of mixing in durian,” said Becker, referring to the odoriferous tropical fruit popular in Southeast Asia. When it comes to cross-border selling and US-China relations, necessity is the mother of invention.

In China for China

The third business example did not want to be identified due to ongoing sensitivities in both countries. What we can say is that the company is in the transportation industry and has over 600 employees 70 of whom are in China.

A big change in their export business is the need to be closer to their international customers, so the company is now doing manufacturing in China in what is known as “in China for China.” The main reason is that the time and cost of shipping products across the Pacific Ocean put them at a competitive disadvantage. “When we send technicians to service the systems we make, it takes days and is expensive,” a company representative said. “Customers want service fast and we need to be there in hours, not days.” In addition, he said by working with Chinese staff in China, the company can create more world-leading products, using revenues from the China market to support the entire organization—and therefore, US jobs. 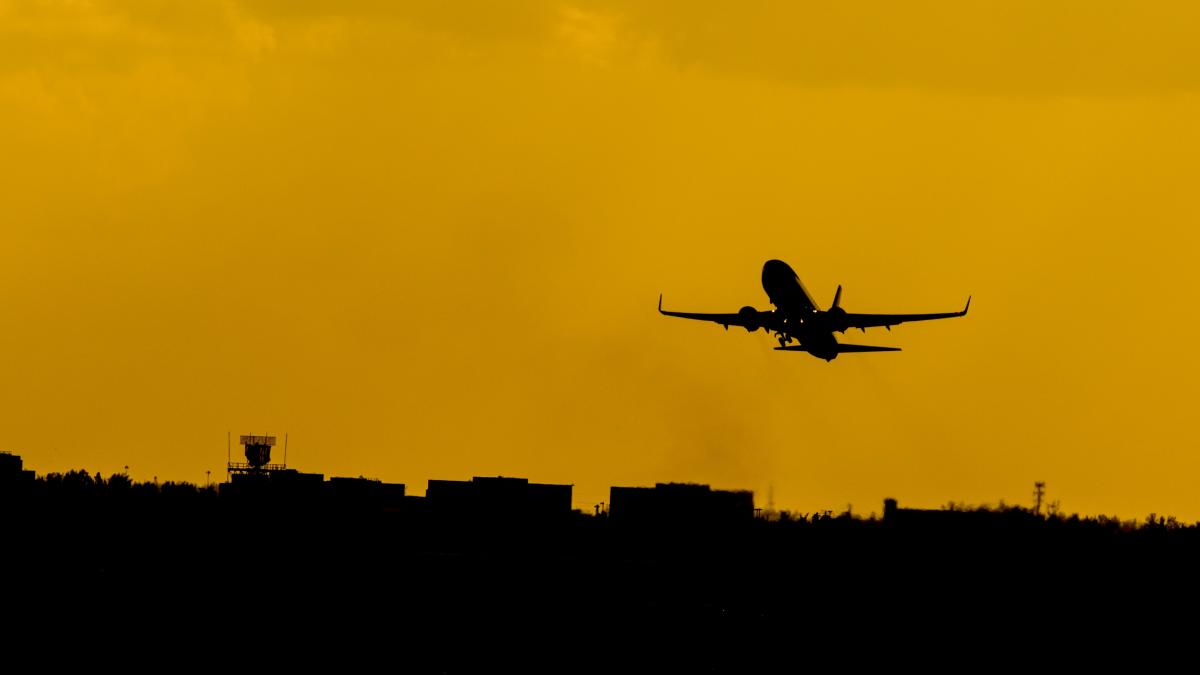 International revenue to support jobs in the US is not an argument made often in Washington, but it fits the Biden administration’s focus on a trade policy for the middle class. Exports to China supported more than 1 million US jobs in 2019, but about 200,000 have been lost due to trade disputes between the two countries. It makes sense that US jobs supported by profits from overseas operations can be lost if those sales fall or disappear altogether, a plausible but not likely scenario.

“Governments can fight all they want, but when we get together about business, we’re friends, not enemies.”

That’s not to say things are totally rosy in China. The company has experienced IP theft issues with copies of their hardware popping up in the market from time to time. But the secret sauce is in the software and that hasn’t been copied. Another more troubling issue is the discrimination some US companies experience when they compete for tenders. China’s drive for self-sufficiency in some technologies, and concern about US companies as reliable suppliers given the tit-for-tat sanctioning, have resulted in missed opportunities involving other non-China competitors.

“We did recently lose a sale that we scored the highest on. The customer said he was told by higher ups not to buy from Americans. The winner was a European company, whose product, in our opinion, is not as good,” said the representative. Hopefully, transparency of the process and equal treatment of US firms will be items to discuss when US and Chinese negotiators sit down for talks, perhaps later this year.

But sales continue and business is good. So good that the company will open another operation in China and wholly own it, unlike in the past when most US companies were required to have a Chinese joint venture partner. The company is generally positive about the future of the bilateral relationship. “Governments can fight all they want, but when we get together about business, we’re friends, not enemies.”

He insists that the future is bright, and the company needs to be in China to be successful. But he acknowledges some things have changed. “It used to be our Chinese employees asked to be called by their American first names. Now they say, ‘Call me by my Chinese name.’”