Policy entrepreneurs are plentiful in America. You can find them everywhere, devoting ideas and energy to getting things done. Terry Cooke founded the non-profit China Partnership of Greater Philadelphia with a focus on getting the United States and China to cooperate on climate change. Getting what he wants done has become more challenging as the two countries ping pong between cooperation, competition, and conflict.

How did he get here and how is he managing multiple challenges simultaneously? He’s been interested in global affairs for a long time, starting in 1988 when he joined the US Commerce Department as a foreign commercial service officer in Shanghai. His two-year posting there bracketed the Tiananmen Square convulsion. Years flew by with postings in Tokyo, Berlin, and Taiwan. In 2002 he took leave from the foreign service and started a consulting business focusing on Taiwan and high tech.

In 2006, Cooke joined the World Economic Forum (WEF) as Director of Asian CEO Partnership with a focus more on Japan than China. He left in 2008. “It was too much travel,” he recalled. “I worked in New York, had my family in Philadelphia, commuted to Geneva, and had responsibility for multiple events in Asia.”

One of the best parts of the WEF job was sitting in on multiple sectoral meetings with CEOs. His main takeaway was that many of these corporate leaders were talking about the challenges of climate change, not as PR or greenwashing, but about the need to transform their companies into low-carbon leaders. “I decided that was the hook that I wanted to hang the second half of my career on when I came back to Philadelphia.”

Cooke recalled his time in Berlin and the impression made by comparing what was then called West Germany with the East, which at the time was terribly polluted. When the Berlin Wall fell, the country united and the cleanup of the Eastern part of the country began. The lesson was that great progress to improve the environment is possible if the political will exists and if clear policy creates predictability for businesses and investors.

In 2010, Cooke joined the Wilson Center, a Washington, DC think tank, as senior fellow for US-China climate cooperation. His research there led to publication of his book Sustaining US-China Cooperation in Clean Energy. Coincident with this research, Secretary of Energy Steven Chu introduced a “national labs program for the 21st century” for clean energy technologies as an outgrowth of the 10-year framework for US-China cooperation on energy and the environment pioneered by Treasury Secretary Hank Paulson in the waning years of the George W. Bush administration.

“Disappointing as these decisions were, there was still potential in the climate change mitigation space, even as other areas like micro-electronics drifted further off-limits.”

To support and expand the energy-efficient buildings program, Cooke founded in 2011 the China Partnership of Greater Philadelphia whose mission was raising awareness and facilitating collaboration to create and bring to market low-carbon solutions for the built environment. For the first years, things went great with lots of local and Chinese partners, mayoral visits, and stakeholders to plan low-carbon futures for urban centers in the United States and China.

“We had some fits and starts, including an unfortunate near-death experience involving IP piracy.” Isn’t this ironic given the long-standing concerns the US government and private sector have about “collaborations” that lead to forced technology transfers and outright pilfering? “It would be if that’s what happened. Instead, the main culprit was an American in an American company.” The company did not want to make a public fuss because of reputational concerns. “We had to shift focus and change our business model to make sure that would never happen again, but it was a one-off, not something endemic with the work we were doing.”

Pulling the plug on energy cooperation 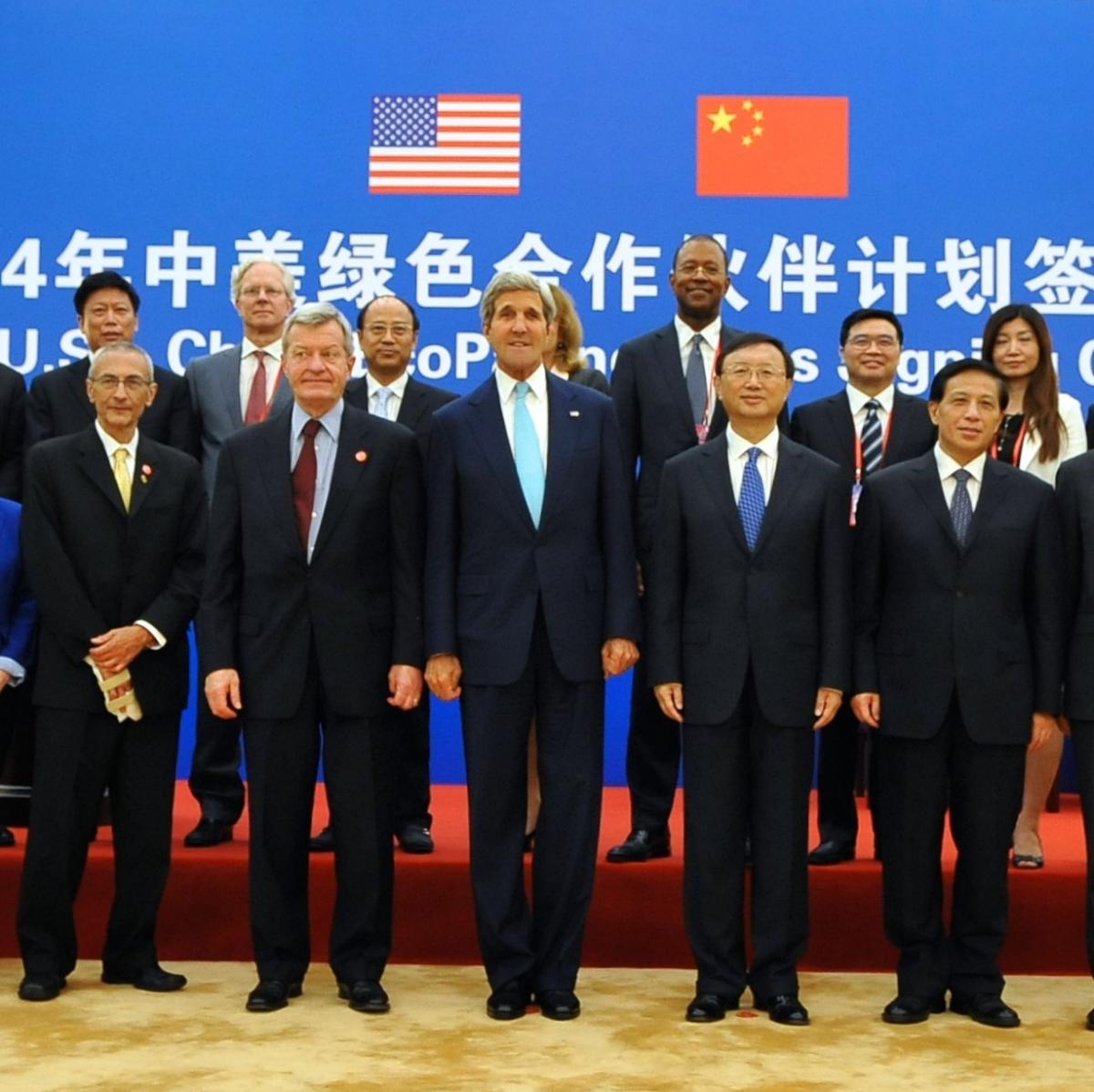 If not as immediately dire, there were other experiences that could have been crippling to his non-profit. Two of them involved former president Donald Trump, who pulled the United States out of the Paris Climate Accords and in 2020 terminated the US-China EcoPartnership program just seven days before leaving office. “Disappointing as these decisions were, there was still potential in the climate change mitigation space, even as other areas like micro-electronics drifted further off-limits.”

The shifting binaries involved with competition and cooperation were making the scope for business cooperation more limited and the non-profit’s work more problematic. Competition is now spilling into the space previously marked by cooperation. The shriveling of discourse between government leaders has only made things more difficult.

“What used to be very effective work through industrial cooperation in lowering emissions is now off the table, though some academic and some intergovernmental climate cooperation continues.”

Early in the Biden administration, excitement was generated by the appointment of John Kerry as climate envoy. Kerry and his PRC counterpart, Xie Zhenhua, had worked closely and cooperatively under Biden’s vice presidency during the Obama administration but Biden administration policy would not be a simple reset to that period. While cooperation continues in areas such as scientific exchange and standards setting, industrial cooperation toward low-carbon goals now enjoys little federal-level support. This even as the planet continues to warm and nations like China and India continue to struggle reducing their addiction to coal.

Kerry recently pointed out in a Foreign Affairs article that there’s still time to avoid disaster but that in the coming years many trillions of dollars will be needed to fund and field clean energy technology. The money, he said, must largely come from the private sector which stands to gain from what could amount to a new industrial revolution.

Cooke worries that the emphasis on zero-sum competition with China over recent years will make broad cooperation in climate change extremely difficult. “The competition drive is spilling into areas that used to be defined by cooperation,” he said. One example is the network of 11 national-level eco parks organized through the Greater Philadelphia-Tianjin EcoPartnership. Germany invested in one such park in 2020, focused on green maritime technology, to the tune of more than $3 billion. The PHL-TJ EcoPartnership had defined a focus on energy-efficient, securely smart and healthy buildings at sustainable-city scale for this network of 11 eco-parks. The emphasis was on large-scale opportunities supported by very large companies and leavened by the innovation of smaller, entrepreneurial companies. “Given the problems in the bilateral relationship, that large scale opportunity has receded for the foreseeable future at least.”

Cooke is highly attuned to the potential for contradiction between commercial competition and climate cooperation, worrying that when Kerry steps down, the space for commercially led environmental solutions to be applied at scale and speed in the two largest global economies will shrink even more. 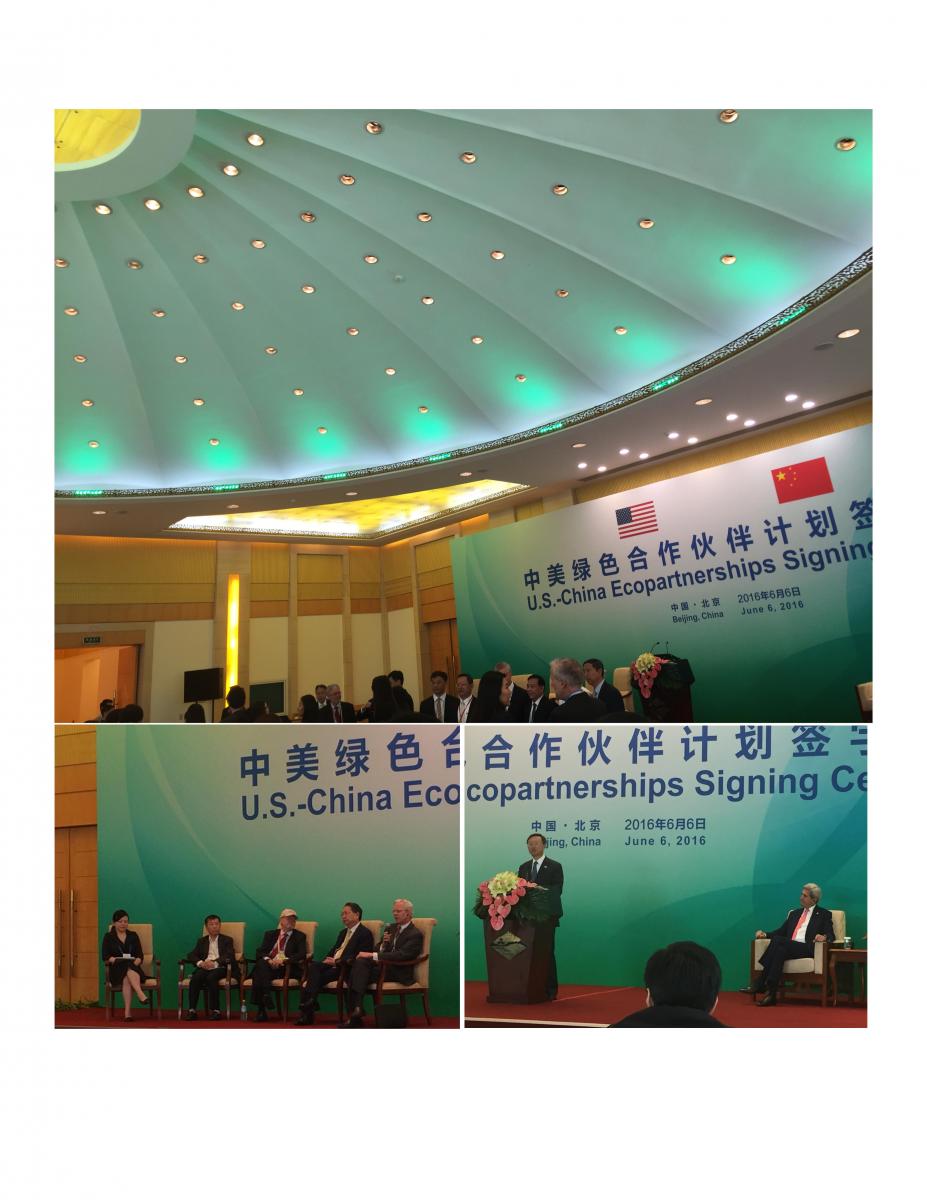 “What used to be very effective work through industrial cooperation in lowering emissions is now off the table, though some academic and some intergovernmental climate cooperation continues.” He concedes that the continuation of even these relationships is not assured given the political environment in both countries.

“My organization was about creating a platform for a US-Sino Eco-Park in China bringing advanced energy efficiency services and technologies to the park. That is viewed negatively now in Washington. What’s disappointing is that other countries friendly to us are now established in China in commercial areas that we’re better at but won’t be able to contribute to because official reluctance for cooperation.”

Cooke says: “The United States needs to be smart about its clean energy approach to China. Yes, China wants to dominate an emerging 21st century industry. But if we out-innovate and out-compete China technologically, we can access their market profitably and also collaborate commercially to forestall the worst effects of climate change. Is it really in the US interest not to have active engagement with China, aside from discrete small companies that are more easily taken advantage of? I’d prefer to see us going in with a convoy approach of large companies and smaller innovators protected by US government policies and focused on delivering measurable, low-carbon solutions at a globally impactful scale. To my mind, this is a huge missed opportunity.”

Cooke’s non-profit, which he recently rebranded as ReGen250 to accommodate additional, non-China-focused environmental programs, continues to assess options for low-carbon partnerships with China. What elements would a US private sector partner want to support that his organization could strongly endorse? “Alternatively, we can just decide we’re only going to focus on local programs in the Mid-Atlantic to increase access to a greener built environment.”

What about the Department of Energy’s prior interest in cooperation? “I have had some high-level discussions within the Department. The entire group that previously supported the commercial exchange at this high level between the national government and subnational actors, including Eco-Partners and city level groups, is not active right now. It was disappointing to learn that.”

“Despite the challenges in the US-China relationship, subnational initiatives, especially in energy and climate change mitigation solutions, should be encouraged and supported.”

Despite the setbacks, Cooke believes there are still areas for engagement with China regardless of the government in power. One involves people-to-people exchanges, albeit challenging at the present moment given China’s zero-COVID policies. Examples of programs that deserve to survive are the adoption of Chinese children, music (he helped the Philadelphia Orchestra create an artist residency program in China) and artistic exchange, student exchange, and most importantly, business. He believes that the once promising universe of business cooperation has constricted but there still remain spaces outside of sensitive technologies where businesses can and must connect.

As a member of the local ecosystem that support US-China commercial relations, he’s not giving up. Rather, he envisions the different China business-related ecosystems across the United States networking and sharing best practices. He said that one such effort was made recently at a Midwest university, but he expressed some disappointment at the fact that the focus turned out to be on a recently discovered vulnerability involving WeChat. It was a security-led briefing, not the commercially minded dialogue that is needed.

Cooke isn’t ready to walk away from his gift of multi-stakeholder cooperation on climate change or the imperative for non-profits like his to act locally and globally. “Efforts at the subnational level have an important place in helping American companies navigate a complex environment in China. They have a great potential impact because they can organize a well-protected convoy in the place of one isolated boat, big or small.”

“Despite the challenges in the US-China relationship, subnational initiatives, especially in energy and climate change mitigation solutions, should be encouraged and supported.”